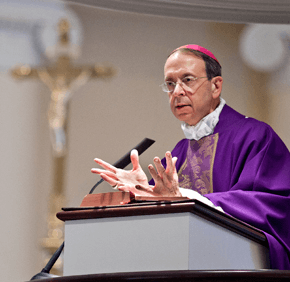 By Maria Wiering
mwiering@catholicreview.org
The sacramental life of the church helps Catholics live their vocation to love, Archbishop William E. Lori said in a homily March 20, at a noon-hour Mass following the morning announcement of his appointment to the Archdiocese of Baltimore.
Archbishop Lori concelebrated the Mass with Cardinal Edwin F. O’Brien, auxiliary Bishop Mitchell T. Rozanski, auxiliary Bishop Denis J. Madden, and approximately 25 other priests at the Basilica of the National Shrine of the Assumption of the Blessed Virgin Mary. The Mass was well attended, with one quarter of the historic church filled with seminarians who had come to congratulate Archbishop Lori.
“It is a joyful and historic day,” Cardinal O’Brien said at the beginning of Mass.
Instead of using the homily to introduce himself to the worshippers, Archbishop Lori launched into his teaching role and linked the Mass’ readings’ water imagery to the life of the church.
He also showed a sense of humor when talking about the first reading from Ezekiel, which described water flowing from the temple of the Lord. “Usually it’s not a very good thing when you see water flowing from the temple. Usually it means you have to call facilitates,” he said, drawing a chuckle from the congregation.
“But in this case, what is flowing from the side of the temple is the great river of God’s life, this great river of salvation which produces all that is necessary for healing, all that is necessary for nourishment,” he said, linking the temple’s water to Jesus as “the living water,” found in the Gospel according to John.
Today, the church’s sacramental life flows from the Eucharist and offers forgiveness and salvation, he said.
“It is this sacramental life that has been at the heart of this archdiocese since 1789,” Archbishop Lori said. “It is this sacramental life that binds us one to another, helps us heal our sins and our divisions, this great sacramental love that gives us the strength that we need to live out our specific vocation to love and to bear witness to Christ, the way, the truth and the life.”
Mary Lutz, 62, described the Mass as beautiful. A member of St. Margaret in Bel Air, she had made a trip to Baltimore with her friend, Christine Chambliss, 66, who attends St. Joan of Arc in Aberdeen, to visit the Basilica. They had no idea that they would be attending a historic Mass, she said.
“I feel so reverent,” she said.At three-and-a-half minutes, Archbishop Lori’s homily was brief, but it made a big impression on Brie Hayes, 31, who attended the Mass with her 7-year-old daughter, Cleo. “He just has a very positive energy. He seems like a very good man,” she said.
PrevNext