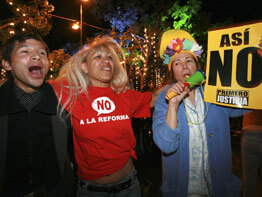 CARACAS, Venezuela – A package of constitutional reforms proposed by Venezuelan President Hugo Chavez that would have increased the president’s powers and established a “socialist economy” was defeated narrowly by voters.

Retired Archbishop Ramon Perez Morales of Los Teques said the Dec. 3 vote “opens a new chapter in the nation’s history, a chapter which must be characterized by the word ‘meeting.’ Venezuela must not be the same as before.”

It was the first defeat for Chavez at the polls in nearly a decade. Chavez called the opposition victory “pyrrhic” and resolved to move the nation toward socialism using other means.

Archbishop Roberto Luckert Leon of Coro, vice president of the Venezuelan bishops’ conference, called on Venezuelans to be careful Chavez does not use other means to expand his powers. He urged the opposition to unite behind the strongest candidates for governor and municipal offices in upcoming regional elections.

Before the balloting, the Venezuelan bishops’ conference issued a statement calling the reforms “unnecessary, morally unacceptable and not a good idea for the country.”

The bishops said in their statement issued Nov. 26 that the reforms would “restrict many civil, social and political human rights enshrined in the constitution, create grounds for political discrimination and introduce new areas of confrontation and polarization among Venezuelans.”

Chavez had proposed changes to the constitution which was drafted and approved in 1999, after his first election to office in 1998. Among the proposed changes were a six-hour workday, a benefits fund for independent workers, a “productive economic model” for the “collective and cooperative construction of a socialist economy,” various forms of property ownership, and the designation of the armed forces as “patriotic and anti-imperialist.”

Proposals to put the currently autonomous Central Reserve Bank under presidential control and remove the two-term limit for presidents were among the most controversial. The reforms also would have given the government greater control over the country’s petroleum and gas deposits and over agriculture, “if necessary,” to ensure food security.