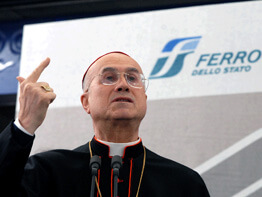 VATICAN CITY – Listening to an early morning talk show on the radio one recent morning, Cardinal Tarcisio Bertone grew annoyed as callers complained about the Vatican’s “silence” on soccer violence.

So the Vatican’s secretary of state picked up the phone and soon found himself on the air, giving listeners an earful.

Cardinal Bertone pointed out that Pope Benedict XVI, the Vatican newspaper and the cardinal himself had all condemned the recent killing of a policeman at a soccer match – and said if people didn’t know that, they weren’t paying attention.

He added that it was a huge mistake to suggest, as some listeners had done, that the pope was somehow detached from the concerns of average people.

“This is just typical boorish ignorance,” he said.

Historically, a Vatican secretary of state communicates in discreet, closed-door conversations and not via talk radio. But five months into his new job, Cardinal Bertone already has signaled that he’s going to be different.

Instead of spending all day behind the scenes, dealing with foreign affairs and the administrative problems of the universal church, Cardinal Bertone frequently goes outside the Vatican walls to give speeches, say Mass or join in a debate.

“I think we’re seeing a different style. Cardinal Sodano was an office person, at his desk from 7 in the morning until midnight, and he’d get his energy from that,” said one Vatican source.

“Cardinal Bertone is more of a people person, an extrovert, and he needs the energy that comes from being in circulation,” he said.

The media has warmed to the cardinal’s personality and given him ample ink and airtime. As a result, the 72-year-old Salesian is building a reputation as a kind of populist pastor willing to speak his mind on a wide spectrum of topics – from the importance of religious art to medical ethics.

Over the last few months, Cardinal Bertone has popped up almost everywhere: talking about the Holocaust at a book presentation, preaching about ethics to Italy’s finance police, blessing a garbage collectors’ Christmas creche, celebrating Mass for typography workers, sampling truffles from Italy’s Piedmont region, viewing an exhibit on Russian Orthodox spirituality and cheering at a church-run soccer tournament.

Pope Benedict is apparently used to seeing his secretary of state come and go. In December, on the feast of the Immaculate Conception, the pope asked him where he was headed, and the cardinal said he was off to the outskirts of Rome to lead a procession.

“Another one?” the pope quipped.

More than anything else, soccer has made Cardinal Bertone a household name in Italy. The cardinal is a longtime fan, and as archbishop of Genoa he once did radio play-by-play for a local soccer match.
Last fall, he declared – jokingly, he later insisted – that the Vatican should field its own national soccer team for the World Cup. More recently, he said it would be beautiful if the Vatican could send an athletic team to the 2008 Olympics in Beijing and hear the Vatican anthem played in a Chinese stadium.
His high public profile has left some people wondering whether the new secretary of state has any energy left over for diplomacy or church administration. Some say it’s not easy for ambassadors to get a meeting with Cardinal Bertone, but others report that the cardinal has prioritized well and has done his homework on the most pressing international issues.

After chairing a closed-door Vatican summit on China in January, Cardinal Bertone drew praise for his knowledge of the various aspects of the situation and his ability to direct the discussions to conclusion.
“It was extremely well organized, and Cardinal Bertone came well prepared. By bringing together the Vatican’s diplomats, evangelization officials and the bishops from the Chinese church, the cardinal was implementing the pope’s idea that Vatican diplomacy should not be detached from pastoral reality,” said one informed source.

Alberto Melloni, an Italian church historian, said Cardinal Bertone helped design a “diplomatic masterpiece” during the pope’s visit to Turkey last fall, when the Vatican made clear that it did not oppose Turkish entry into the European Union despite the pope’s previous statements as a cardinal.

In effect, Melloni said, Cardinal Bertone led the pope to “rethink” the Turkish question, but without making it appear as a reversal of position or a tactical political move.

Melloni said Cardinal Bertone has shown that he’s not interested in revolutionizing Vatican foreign policy, but is happy to work with the diplomatic machine he’s inherited.

“He’s not undertaking an anti-Sodano operation. He didn’t arrive with a vacuum cleaner, with the idea of sweeping out the people chosen by his predecessor,” Melloni said.

As for his penchant for keeping in the public eye, Melloni said the cardinal has always liked to socialize and communicate.

“He’s a true Salesian, he wants to be with people,” the historian said.

Some think Cardinal Bertone’s time is being taken up by too many strictly Italian events, like liturgies for Italian youth groups or visits to Italian hospitals.

But popes and Vatican officials have often spoken to the universal church through the pastoral environment that surrounds them, and quite logically it’s the Italians who are inundating the secretary of state with invitations.

Italy, to be sure, is enjoying Cardinal Bertone’s ascendancy. The fact that the German pope chose an Italian cardinal as his right-hand man was extremely important to a country where many consider the papacy on temporary loan to foreigners.

And though everyone agrees it’s too early to talk about papal elections, Cardinal Bertone’s popularity already has led some observers to place him at the top of the list of Italian “papabili” in the event of a future conclave.