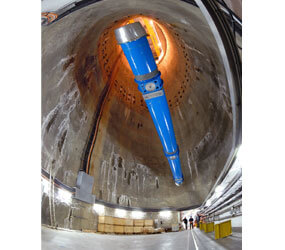 The Geneva-based laboratory would like to invite an astronomer from the Vatican Observatory to collaborate on studies concerning the origin of the universe, said Ugo Amaldi, a professor of medical physics and president of the TERA Foundation, which works closely with CERN in finding ways to apply atomic research in treating cancer.

CERN, the European Organization for Nuclear Research, “is an international and European (facility), and to have the Vatican Observatory send some or one of its young scientists will be something that is extremely important,” he said.

He made his comments during a Dec. 10 Vatican press conference launching the Italian-language version of “The Heavens Proclaim,” a book about the history of the Vatican and astronomy.

The head of the Vatican Observatory, Jesuit Father Jose Funes, said during the book presentation that he hopes Gabriele Gionti, a young Vatican astronomer who will be ordained in June, will be involved in the CERN collaboration.

Gionti has a doctorate in physics and specializes in quantum gravity, and he is finishing his theology studies at the Center for Theology and the Natural Sciences in Berkeley, Calif.

Father Funes told Catholic News Service that scientists at CERN are interested in “astroparticles – the first particles in the universe. And at the moment we don’t have anyone on our staff prepared to follow these studies. So maybe Gabriele Gionti has the background and the interest in collaborating on these topics.”

The plan for a Vatican-CERN exchange was borne out of a visit, organized in part by Amaldi, of a Vatican delegation to the CERN facilities in July. The delegation included Father Funes and Cardinal Giovanni Lajolo, president of the commission governing Vatican City.

Amaldi, who worked as a particle physicist at CERN, told CNS that even though CERN scientists study subatomic particles and Vatican astronomers study large celestial objects and enormous galaxies, “there are theoretical similarities” in their research on the origin of the universe, stars and planets.

He said ideally a Vatican collaborator would stay a year to work closely with scientists conducting experiments with CERN’s Large Hadron Collider – the world’s most powerful subatomic particle collider, which is used in experiments for trying to better understand the universe and what happened immediately after the Big Bang.

Amaldi said it would be interesting to have an astronomer who can look at the data from these experiments “from that other point of view – a view of astronomy” and its big-picture perspective.

Amaldi has also proposed that CERN scientists volunteer to teach at the Vatican Observatory’s summer school, held in Castel Gandolfo every other year for students in the final years of undergraduate or early years of graduate studies in astronomy or astrophysics. At least one-third of the students come from developing countries.

Amaldi said “teaching courses at the wonderful school (the Jesuit astronomers) have will be the next step, and it’s important because it can touch a lot of countries” that have no contact with CERN and its studies.