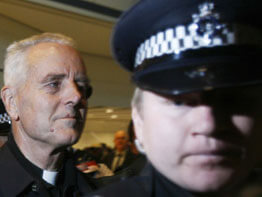 VATICAN CITY – The Vatican said Bishop Richard Williamson’s statement of regret for denying the extent of the Holocaust does not meet the Vatican’s demand that he publicly recant his position.

“The declaration of the bishop does not seem to respect the conditions established in the note of the Secretariat of State of Feb. 4, 2009, where it says that he ‘must distance himself in an absolutely unequivocal and public way from his positions regarding the Shoah,’ ” Jesuit Father Federico Lombardi, the Vatican spokesman, said Feb. 27.

The Vatican had said Bishop Williamson would not be allowed to function as a bishop in the church unless he disavowed his remarks about the Holocaust and publicly apologized. He is one of four traditionalist bishops whose excommunication was lifted in January by Pope Benedict XVI.

On Feb. 26, Bishop Williamson released a statement in London saying his superior, Bishop Bernard Fellay, and the pope “have requested that I reconsider the remarks I made on Swedish television four months ago because their consequences have been so heavy.”

“Observing these consequences I can truthfully say that I regret having made such remarks, and that if I had known beforehand the full harm and hurt to which they would give rise, especially to the church, but also to survivors and relatives of victims of injustice under the Third Reich, I would not have made them,” he said.

Bishop Williamson said that in an interview broadcast in January by Swedish television he had offered “only the opinion … of a nonhistorian, an opinion formed 20 years ago on the basis of evidence then available and rarely expressed in public since.”

“However, the events of recent weeks and the advice of senior members of the Society of St. Pius X have persuaded me of my responsibility for much distress caused. To all souls that took honest scandal from what I said, before God I apologize,” he said. “As the Holy Father has said, every act of unjust violence against one man hurts all mankind.”

The Feb. 26 statement was the second public apology to the pope from the British-born bishop. In a letter posted on his blog Jan. 30, the bishop apologized to Cardinal Dario Castrillon Hoyos for “having caused to yourself and to the Holy Father so much unnecessary distress and problems.” Cardinal Castrillon heads the Pontifical Commission “Ecclesia Dei,” which oversees the reconciliation of traditionalist Catholics with the church.

Bishop Williamson left Argentina Feb. 24 after the government told him he must leave or face expulsion. Argentina’s Interior Ministry said Feb. 19 that Bishop Williamson “has concealed the true motive for his stay in the country” because he said he was an employee of a nongovernmental group when he was serving as rector of the seminary of the Society of St. Pius X in La Reja for the past five years. The bishop was removed as head of the seminary in early February.

The Argentine government also said Bishop Williamson’s remarks that the Holocaust was exaggerated and that no Jews died in Nazi gas chambers insulted and offended Argentine society and the Jewish community.

An Argentine news station showed the bishop, wearing sunglasses and a baseball cap, shaking his fist at a reporter as he left Buenos Aires.

Upon his arrival in London, Bishop Williamson was escorted by police to a waiting car. Although the bishop and police were surrounded by journalists with cameras and microphones, the bishop made no comment.

Bishop Williamson and the three other traditionalist bishops were ordained against papal orders in 1988 by the late French Archbishop Marcel Lefebvre, founder of the Society of St. Pius X.