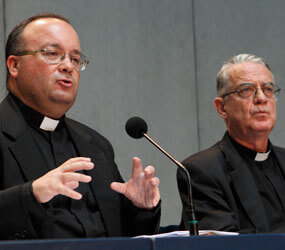 VATICAN CITY – The Vatican has revised its procedures for handling priestly sex abuse cases, streamlining disciplinary measures, extending the statute of limitations and defining child pornography as an act of sexual abuse of a minor.

Vatican officials said the changes allow the church to deal with such abuse more rapidly and effectively, often through dismissal of the offending cleric from the priesthood.

As expected, the Vatican also updated its list of the “more grave crimes” against church law, called “delicta graviora,” including for the first time the “attempted sacred ordination of a woman.” In such an act, it said, the cleric and the woman involved are automatically excommunicated, and the cleric can also be dismissed from the priesthood.

Vatican officials emphasized that simply because women’s ordination was treated in the same document as priestly sex abuse did not mean the two acts were somehow equivalent in the eyes of the church.

“There are two types of ‘delicta graviora’: those concerning the celebration of the sacraments, and those concerning morals. The two types are essentially different and their gravity is on different levels,” said Monsignor Charles Scicluna, an official of the Vatican’s doctrinal congregation.

Sexual abuse of a minor by a priest was added to the classification of “delicta graviora” in 2001, and at that time the Vatican established norms to govern the handling of such cases, which were reserved to the Congregation for the Doctrine of the Faith. The norms affect how church law treats sex abuse cases; civil law deals with the crime separately.

The latest revisions, approved by Pope Benedict XVI May 21 and released July 15, for the most part codify practices that have been implemented through special permissions granted over the last nine years and make them part of universal law.

The Vatican spokesman, Jesuit Father Federico Lombardi, said publication of the revisions “makes a great contribution to the clarity and certainty of law in this field, a field in which the church is today strongly committed to proceeding with rigor and transparency.”

The norms on sexual abuse of minors by priests now stipulate:

– Use of child pornography now falls under the category of clerical sexual abuse of minors, and offenders can be dismissed from the priesthood. This norm applies to “the acquisition, possession, or distribution by a cleric of pornographic images of minors under the age of 14, for purposes of sexual gratification, by whatever means or using whatever technology.”

– Sexual abuse of mentally disabled adults will be considered equivalent to abuse of minors. The norms define such a person as someone “who habitually lacks the use of reason.”

In 2003, two years after promulgating the Vatican’s norms on priestly sex abuse, Pope John Paul II gave the doctrinal congregation a number of special faculties to streamline the handling of such cases. The new revisions incorporate those changes, which were already in practice:

– In the most serious and clear cases of sexual abuse of minors by priests, the doctrinal congregation may proceed directly to laicize a priest without going through an ecclesiastical trial. In these instances, the final decision for dismissal from the clerical state and dispensation from the obligations of celibacy is made by the pope.

– The doctrinal congregation can dispense with using the formal judicial process in church law in favor of the “extrajudicial process.” In effect, this allows a bishop to remove an accused priest from ministry without going through a formal trial.

– The doctrinal congregation can dispense from church rules requiring only priests with doctorates in canon law to serve on church tribunals in trials of priests accused of abusing minors. This means qualified lay experts, including those without a canon law doctorate, can be on the tribunal staff, or act as lawyers or prosecutors.

– The doctrinal congregation’s competency in such cases means it has the right to judge cardinals, patriarchs and bishops as well as priests. Vatican sources said this norm, which originates from a decision by Pope John Paul II in 2004, indicates that if the pope authorizes a trial or penal process against such persons for sex abuse or another of the “more grave crimes,” the doctrinal congregation would be the tribunal and could also make preliminary investigations.

The revised norms maintain the imposition of “pontifical secret” on the church’s judicial handling of priestly sex abuse and other grave crimes, which means they are dealt with in strict confidentiality. Father Lombardi said the provision on the secrecy of trials was designed “to protect the dignity of everyone involved.”

The spokesman said that while the Vatican norms do not directly address the reporting of sex abuse to civil authorities, it remains the Vatican’s policy to encourage bishops to report such crimes wherever required by civil law.

“These norms are part of canon law; that is, they exclusively concern the church. For this reason they do not deal with the subject of reporting offenders to the civil authorities. It should be noted, however, that compliance with civil law is contained in the instructions issued by the Congregation for the Doctrine of the Faith as part of the preliminary procedures to be followed in abuse cases,” he said.

Father Lombardi added that the doctrinal congregation also was studying how to help bishops around the world formulate local guidelines on sexual abuse in church environments.

He said that would be “another crucial step on the church’s journey as she translates into permanent practice and continuous awareness the fruits of the teachings and ideas that have matured over the course of the painful events of the ‘crisis’ engendered by sexual abuse by members of the clergy.”

The new norms treat a number of other “delicta graviora” connected with sacramental issues.

On the “attempted ordination of a woman,” the norms essentially restated a 2008 decree from the doctrinal congregation that said a woman who attempts to be ordained a Catholic priest and the person attempting to ordain her are automatically excommunicated.

The norms added that if the guilty party is a priest, he can be punished with dismissal from the priesthood. For those wondering why an excommunicated priest would also be laicized, Vatican sources said they were two different kinds of penalties.

The norms address violations against the sacraments of penance and the Eucharist.

One norm explicitly extends the crime of violating the seal of confession through use of modern technology – by recording confessions or making any such recording public through social communication media. This reflects a change introduced in practice in 2003.

Vatican sources said the direct violation of the confessional seal would occur, for example, when a priest betrays the name of the penitent and the sin confessed; an indirect violation might occur if the priest betrays only the name of the penitent or only the confessed sin, but the missing element is understood from the context of the conversation.

Regarding the Eucharist, the revised norms modify the language concerning the attempted and simulated celebration of the Eucharist, and sacrilegious consecration of one or both matters in or outside of the eucharistic celebration.

The revised norms include for the first time “crimes against the faith” – heresy, apostasy and schism – saying that while competency normally falls to local bishops in such cases, the doctrinal congregation becomes competent in the case of an appeal.

The text of the revised norms and other documentation on the norms are available this week in Origins, Vol. 40, No. 10. Check www.originsonline.com or call 202-541-3290.