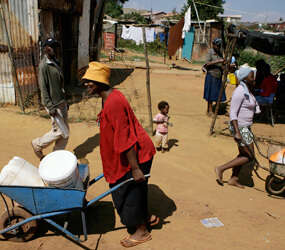 VATICAN CITY – Christians and Muslims share concern and compassion for those suffering in poverty and can find common ground to work toward eradicating both the causes and the problems it creates, the Vatican said.

In its traditional message to Muslims at the end of Ramadan, the Islamic holy month of fasting, the Pontifical Council for Interreligious Dialogue called attention to poverty as “a subject at the heart of the precepts that, under different beliefs, we all hold dear.”

As “brothers and sisters in humanity,” the letter said, people of both faiths can help the poor “establish their place in the fabric of society.”

The letter, published Sept. 11, was signed by Cardinal Jean-Louis Tauran, president of the pontifical council, and Archbishop Pier Luigi Celata, council secretary. It emphasized that in addition to the suffering endured by the poor the consequences of poverty on society as a whole are dire and require the attention of all people of faith.

“We all know that poverty has the power to humiliate and to engender intolerable sufferings,” the letter said. “It can provoke hostile actions using any available means, even seeking to justify them on religious grounds.”

This is why “confronting the phenomenon of extremism and violence necessarily implies tackling poverty through the promotion of integral human development,” the letter said, citing a concept promoted by Pope Paul VI in his 1967 encyclical, “Populorum Progressio.”

The origin of poverty lies in “the lack of respect for the innate dignity of solidarity and calls us to a global solidarity,” the letter said.

As believers, it continued, Muslims and Christians can work together “for a just and durable solution to the scourge of poverty,” while also “reflecting on the grave problems of our times.”

The letter acknowledged that steps had been made in improving Christian-Muslim relations and that in many parts of the world “we have passed from tolerance to a meeting together, beginning with common lived experience and real shared concerns.”

This year’s Ramadan period began Aug. 21 and was to finish Sept. 19.