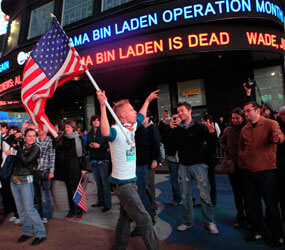 VATICAN CITY – The Vatican said the killing of al-Qaida leader Osama bin Laden, a man who sowed division and hatred and who caused “innumerable” deaths, should prompt serious reflection about one’s responsibility before God, not rejoicing.

The Vatican statement May 2 came the day after President Barack Obama announced that U.S. forces had killed bin Laden in an attack on his hideout in northwest Pakistan. In several U.S. cities, the news prompted street demonstrations and expressions of jubilation.

“Osama bin Laden, as we all know, bore the most serious responsibility for spreading divisions and hatred among populations, causing the deaths of innumerable people, and manipulating religions to this end,” Father Lombardi said.

“In the face of a man’s death, a Christian never rejoices, but reflects on the serious responsibilities of each person before God and before men, and hopes and works so that every event may be the occasion for the further growth of peace and not of hatred,” the spokesman said.

The Vatican missionary news agency, Fides, reported that Christian schools and other institutes were closed and churches put on guard in Pakistan’s main cities out of fear of possible repercussions on the Christian minorities there. Pakistani Christians are often identified in extremist literature with the West and the United States.

Paul Bhatti, a government adviser for religious minorities in Pakistan, told Fides that “the situation is tense.”

“In fact, there are strong fears of reactions – senseless reactions – against the Christian minorities. The government is giving the maximum attention to prevention measures,” he said.

Father Mario Rodrigues, director of the Pontifical Mission Societies in Pakistan, said after a meeting with government officials May 2: “They put us on alert, requesting the closure of our institutes and making available additional police personnel around the churches. The Christians of Pakistan are innocent victims in this and other situations. Any pretext is used to threaten them or launch an attack.”

Rodrigues said some experts predicted that bin Laden’s killing would weaken the Taliban and their ideologies, which could help diminish anti-Christian persecution in the long term. But he said radical Islamic groups were flourishing in Pakistan, and other extremist leaders could arise.

What is needed, he said, is a serious policy of interreligious tolerance at every level – cultural, social, political and legislative.