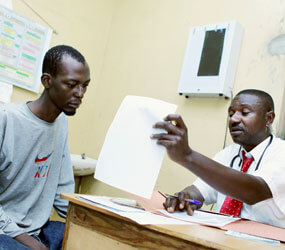 VATICAN CITY – The Vatican will host international scientists at a conference on AIDS in late May, an encounter church officials hope will help clarify Pope Benedict XVI’s recent comments on condom use in AIDS prevention, a Vatican official said.

Following the one-day conference May 28, the Vatican plans to publish a handbook of pastoral guidelines for Catholic health care workers on AIDS care and prevention, Monsignor Jean-Marie Mpendawatu, undersecretary of the Pontifical Council for Health Care Ministry, said Feb. 3.

Monsignor Mpendawatu said the Vatican conference and the subsequent guidelines would take a “global” approach to the AIDS question, and not focus on condoms. But he said the condom issue would be addressed, in the wake of the recent debate over Pope Benedict’s remarks and a Vatican doctrinal note that followed.

In the book-length interview, “Light of the World,” published in November, the pope said that while condoms were not the answer to the AIDS epidemic, the use of condoms may be a sign of moral responsibility in some specific situations when the intention is to reduce the risk of infection. He gave the example of a prostitute.

The papal comments sparked discussion and debate, including among Catholic health care professionals. In December, the Congregation for the Doctrine of the Faith issued an explanatory note saying the pope’s remarks did not signify a change in the church’s moral teaching or its pastoral practice, in particular on birth control.
Monsignor Mpendawatu said that among those attending the May conference would be leading scientific experts on AIDS, including Michel Sibide, executive director of the Joint U.N. Program on HIV/AIDS. He said ranking Vatican officials would also address the conference, and explain to participants in further detail the points made in the doctrinal congregation’s note.

“Sometimes there is a problem of understanding, of explaining things well: What did the pope say, really, authentically? What is the thinking of the pope?” he said.

He said the results of the May conference, which will look at the church’s global effort to assist AIDS patients, would also represent a contribution to the 6th International AIDS Society scientific conference to be held in Rome July 17-20.

The council also is preparing to update its “Charter for Health Care Workers,” which dates to 1994. The charter was framed by the principle that all health care must be performed in the service of life and with full respect for the human person, and new bioethical issues need to be addressed, he said.