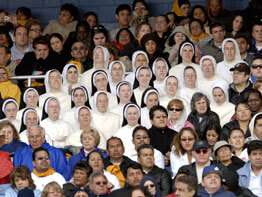 WASHINGTON – The Vatican has initiated an apostolic visitation of institutes for women religious in the United States to find out why the numbers of their members have decreased during the past 40 years and to look at the quality of life in the communities.

The announcement was made Jan. 30 at the Basilica of the National Shrine of the Immaculate Conception in Washington by Sister Eva-Maria Ackerman, a member of the American province of the Sisters of St. Francis of the Martyr St. George.

She will assist Mother Mary Clare Millea, a Connecticut native who is superior general of the Apostles of the Sacred Heart of Jesus, an international religious institute that has its headquarters in Rome.

Cardinal Franc Rode, prefect of the Vatican’s Congregation for Institutes of Consecrated Life and Societies of Apostolic Life, appointed Mother Clare as the apostolic visitor.

The cardinal sent letters detailing the task to both the Leadership Conference of Women Religious and the Council of Major Superiors of Women Religious, the two major organizations representing heads of women’s religious orders in the U.S.

It is too early to know how many volunteers will be enlisted to visit nearly 400 Catholic institutes for women religious in the U.S., how much it will cost or who will pay for the study, Sister Eva-Maria said during the press conference at the national shrine.

“We hope to discover and share the vibrancy and purpose that continue to accomplish so much, as well as to understand the obstacles and challenges that inhibit these individuals and institutions, thus limiting their growth and/or redirecting their resources and outreach,” she said.

The study – which is expected to be completed by 2011 – is in no way connected to the apostolic visitation of more than 200 U.S. seminaries and formation houses in 2005 and 2006, which was ordered in response to the sexual abuse crisis that hit the U.S. church, Sister Eva-Maria said.

It was not known why the Vatican chose to do this study now, why the U.S. was singled out and what prompted the Vatican congregation to order it, she said. “I don’t even want to speculate.”

Once the study is concluded, a “comprehensive and confidential” report will be given to Cardinal Rode, but its findings are not expected to be made public, Sister Eva-Maria said.

“First, Mother Clare will solicit voluntary input from the superiors general through inviting them to make personal visits with her in Rome or in the United States,” she said. “During the second stage, the major superiors in the United States will be asked for information such as statistics, activities and community practices. Selected on-site visits will be made during the third stage.”

Catholic women religious have been involved in education, health care and a variety of pastoral and social services in the U.S. since before the nation was founded in 1776, said Mother Clare in a prepared statement released at the press conference.

“I am truly humbled and a bit overwhelmed,” she said of her assignment. “While I have visited each of the communities and missions in my own congregation, the thought of gathering facts and findings about nearly 400 institutes across the United States can be daunting in scope.”

A Web site, www.apostolicvisitation.org, has been launched to provide basic information about the project.

“I know that the object of this visitation is to encourage and strengthen apostolic communities of women religious, for the simple reason that these communities are integral to the entire life of the Catholic Church, in the United States and beyond,” Mother Clare said.

Sister Eva-Maria acknowledged that the population of women religious has significantly dropped during the past several decades, and that fewer nuns have chosen to teach school in the past 30 years in favor of doing social outreach.