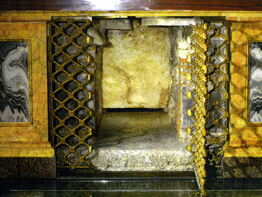 VATICAN CITY (CNS) — After years of archaeological work, Vatican officials announced they have identified the tomb of St. Paul beneath the Rome basilica dedicated to the apostle.

Authorities said Dec. 11 that a roughly cut marble sarcophagus was found beneath a historic inscription that reads: “Paul Apostle Martyr.” The tomb lies several feet below the main altar of the Basilica of St. Paul Outside the Walls.

Only one end of the sarcophagus has been opened to view, and the rest is buried beneath building material. If Pope Benedict XVI gives permission, the experts may attempt to open the sarcophagus and find out whether the saint’s relics are inside.

“We can be certain that this is the tomb of St. Paul,” Cardinal Andrea Cordero Lanza di Montezemolo, archpriest of the basilica, told a Vatican press conference.

“No one ever had any doubt that the basilica was built on the site of the tomb. Now we can see it, through a small window we have created,” the cardinal said.

He said Vatican experts attempted to X-ray the tomb to view the contents, but it did not work because of the thick marble walls of the sarcophagus.

An “internal exploration” of the sarcophagus would pose technical problems but probably will be attempted, the cardinal said. He said it was certain that the tomb had remained sealed since it was placed there in the fourth century.

“The Basilica of St. John Lateran says they have the heads of Sts. Peter and Paul. I don’t know how they can, since this tomb has never been opened,” the cardinal said.

Giorgio Filippi, the Vatican archaeologist who carried out the studies on the tomb area, said that, archaeologically speaking, it did not matter whether relics of St. Paul were discovered inside the sarcophagus or not.

He said positive identification of the tomb was made using historical and scientific methods, independent of the presence of relics.

Experts believe the marble sarcophagus was put in place during the reconstruction of the basilica in 390. The church was remodeled several times afterward and almost completely destroyed by fire in 1823.

One of the more important archaeological finds, Filippi said, was that the sarcophagus had a funnel-shaped hole in the top — later closed with mortar — through which the faithful could stick pieces of cloth to make secondary relics.

He said that was a significant sign that the tomb was revered from the beginning as that of St. Paul of Tarsus.

Tradition holds that St. Paul was martyred by beheading in the first century and that his body was buried in a cemetery along the Via Ostiense, where the basilica was built.

Filippi began studying the basilica in 1993, and in 2002 he made the first close examination that led to the lid of the sarcophagus.