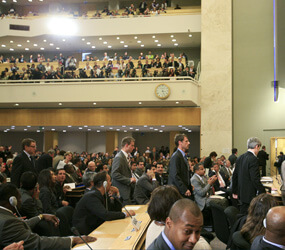 VATICAN CITY – The Vatican has criticized Iranian President Mahmoud Ahmadinejad’s remarks about Israel at a U.N. conference on racism as “extremist and unacceptable” and said the comments promote an atmosphere of conflict.

At the same time, Vatican officials, including Pope Benedict XVI, emphasized the importance of participation in the conference, which was being boycotted by the United States and several other Western countries.

Mr. Ahmadinejad told conference participants in Geneva April 20 that Israel had “resorted to military aggression to make an entire nation homeless under the pretext of Jewish suffering” and had established a “totally racist government in the occupied Palestine.” His comments prompted a temporary walkout by dozens of diplomats in attendance.

The Vatican spokesman, Jesuit Father Federico Lombardi, told Vatican Radio April 20 that “statements like those of the Iranian president do not go in the right direction, because even if he did not deny the Holocaust or the right of Israel to exist, he expressed extremist and unacceptable positions.”

“For this reason it is important to continue to affirm with clarity the respect for human dignity against every form of racism or intolerance. We hope the conference can still serve this purpose,” Father Lombardi said.

The following day, the Vatican spokesman issued a broader statement, saying that “the Holy See deplores the use of this United Nations forum for the adoption of political positions of an extremist and offensive nature against any state.”

“This does not contribute to dialogue and it provokes an unacceptable atmosphere of conflict,” it said.

Father Lombardi said the conference was an important opportunity to take new steps toward “effectively combating the racism and intolerance that still today affect children, women, those of African descent, migrants and indigenous peoples … in every part of the world.”

Archbishop Silvano Tomasi, the chief Vatican representative to U.N. agencies in Geneva, told Catholic News Service by telephone April 20 that, although the Vatican objected to the Iranian president’s remarks about Israel, Vatican delegation members did not think walking out was the right response.

Archbishop Tomasi said it was important for people not to be distracted by the remarks of the Iranian president. Much more significant than Mr. Ahmadinejad’s speech, he said, were the real advances made in the draft conference document, which recognizes the Holocaust as something not to be forgotten and condemns anti-Semitism as well as intolerance against other religions.

The archbishop said it was also essential for the international community to give attention to the new forms of racism and discrimination that are emerging, especially against immigrants, the indigenous and the economically marginalized.

On April 19, Pope Benedict underlined the importance of the international conference and urged participants to take concrete steps to combat discrimination and intolerance around the world.

The pope, speaking at a noon blessing at his villa outside Rome, said the conference was important because, despite the lessons of history, racist attitudes and actions are still present in contemporary society.

He encouraged participants to take “firm and concrete action, at the national and international levels, to prevent and eliminate every form of racism and intolerance.” Above all, he said, a vast educational effort is needed so that human dignity and fundamental human rights are better understood and respected.

“For its part, the church teaches that only recognition of the dignity of man, created in the image and likeness of God, is able to constitute a sure reference point in this commitment,” he said.

“I sincerely encourage all delegates present at the Geneva conference to work together in a spirit of mutual dialogue and acceptance in order to put an end to every form of racism, discrimination and intolerance,” he said.

The Geneva conference was convened to examine a statement adopted in 2001 at the U.N.’s first conference on racism held in Durban, South Africa. The United States and Israel left the 2001 conference when some Arab representatives argued that Zionism was equivalent to racism.

The conference in Geneva was being boycotted by the United States, Canada, Australia, New Zealand and several European governments because of fears that it would again provide a platform to critics of Israel. U.N. officials have pointed out that the text under consideration in Geneva has been revised in recent months, and the latest draft does not include references to Israel or Zionism.

Father Lombardi said the draft document being examined was “acceptable, since the main elements that prompted objections have been removed.”

But in a statement released April 18, the U.S. State Department said the draft text still “singles out one particular conflict and prejudges key issues that can only be resolved in negotiations between the Israelis and Palestinians.”

The statement said the United States also has serious concerns with relatively new additions to the text regarding “incitement” to religious hatred that run counter to the U.S. commitment to unfettered free speech. Unfortunately, the U.S. statement said, it appeared that those concerns would not be addressed at the Geneva conference.

Some Muslim countries have pressed for a ban on language considered insulting to Islam.