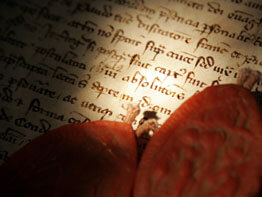 VATICAN CITY – It was billed as the Vatican’s effort to “come clean” and reveal secret documents about the mysterious Knights Templar, the medieval crusading order that has inspired ancient legends and modern novels.

But after seeing exaggerated press reports for two weeks, Bishop Sergio Pagano apparently had had enough.

You could almost feel the air going out of the balloon in the packed Vatican conference room, where journalists had assembled for the unveiling of a collector’s edition of Vatican Secret Archives documents on the Templar order.

Since early October, international media had pumped the story, saying parchment records uncovered in the archives would exonerate and rehabilitate the Templars, erasing the charges of heresy that led to the order’s dissolution in 1312.

The idea was that the Vatican was finally divulging information it had long hidden – a notion that tied in vaguely with Dan Brown’s novel, “The Da Vinci Code,” which gave the Templars a role in an ongoing church conspiracy.

But Bishop Pagano, prefect of the Vatican archives, was having none of this.

The new Vatican book is “not a scoop, not something extraordinary, does not reveal or remove penalties that were in fact never imposed, or bring to light hidden things,” he said.

The Vatican wasn’t doing this to celebrate or rehabilitate the Knights Templar, he said. The intent was simply to make scholarly material available in a format of high artistic quality, he said.

Many media reported that the elaborate collector’s edition, titled “Processus Contra Templarios” (“The Trial Against the Templars”), would include a previously secret document called the Chinon parchment, supposedly discovered in 2001 after being misplaced in a Vatican archives drawer.

The Chinon parchment details a 1308 investigation of the Knights Templar ordered by Pope Clement V. It is noteworthy because it shows that Pope Clement absolved the Knights of heresy and wanted at that point to reform the order rather than suppress it.

Bishop Pagano, however, said the Chinon document was not a recent discovery. It was “described perfectly” in a 1912 Vatican archives catalogue and was available to researchers – but researchers didn’t notice until 2001, he said.

What seemed to bother Bishop Pagano most was the hype over a scholarly volume.

“All this noise is not our style,” he said.

“We are still proudly convinced – and perhaps we are in a minority on this – that books should be published, read and studied, not ‘presented.’ Today, books are presented and not even read afterward,” he said.

Bishop Pagano’s blunt words suggested a divergence between scholarship and marketing at the Vatican, an impression that was reinforced when the bishop stood up and left halfway through the press conference.

Scrinium, the company that is publishing the new volume as part of a series of facsimile documents from the Vatican archives, sang a somewhat different tune.

“The whole world is talking” about the new work, it crowed in a statement.

The reason people are attracted to these publications, it said, is that there is huge interest in “the legends, myths and pages of history” that are documented in the Vatican’s files. The Vatican Secret Archives holds too much to classify systematically, and this surfeit of texts and artifacts may yield “new treasures” in the future, it said.

Presumably, Scrinium will be there to market them.

Ferdinando Santoro, president of Scrinium, told Catholic News Service that some media had indeed overly hyped the Templars volume. He acknowledged, however, that the publicity had helped sales of the book.

The edition was designed with scholars and libraries in mind, but Santoro said the publicity has generated requests from a much wider audience, including collectors, sheiks, international fashion designers and others wealthy enough to treat themselves to a volume that is hand-sewn, bound in goatskin parchment and embellished with gold decorations.

In this case, the reproduction may be better than the original documents. By using an ultraviolet Wood’s light, experts were able to recover nearly invisible margin notes, some believed written in the hand of Pope Clement as he reviewed the reports of the interrogation of the knights.

Based on the evidence assembled, Vatican scholars say Pope Clement’s suppression of the Knights Templar was dictated by a combination of political events and ecclesial pressures.

Pope Clement wanted to end abuses in the order and reorganize it, but eventually he bowed to the king’s pressure and formally dissolved the Knights Templar, because he feared a schism of the church in France.