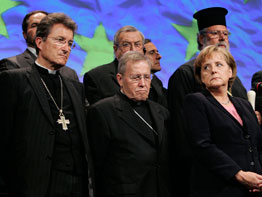 ROME – Divided Christians need to recover the original spiritual inspiration of the ecumenical movement, always ensuring that it is grounded in a desire to proclaim salvation in Jesus Christ more effectively, said Cardinal Walter Kasper.

Mergers to form a mega-Christian church are not the goal, said the president of the Pontifical Council for Promoting Christian Unity.

Precisely because it takes denominational differences seriously, “spiritual ecumenism suffers from the wounds caused by the divisions within the church,” the cardinal said at a Jan. 24 ceremony at Centro Pro Unione, a dialogue and study center operated by the Franciscan Friars of the Atonement.

The friars, whose founder, Father Paul Wattson, began the Week of Prayer for Christian Unity 100 years ago, presented their Christian Unity Award to Cardinal Kasper’s council and to the Faith and Order Commission of the World Council of Churches.

The award recognized the two offices for their 40 years of joint work organizing, planning and promoting the week of prayer worldwide.

The Rev. John Gibaut, a Canadian Anglican and director of the Faith and Order Commission, said the week of prayer is a concentrated occasion to gather the prayers for the unity of the church that are offered continuously around the world, either implicitly when the Our Father is recited or explicitly in the eucharistic prayer.

“The very nature and mission of the church,” he said, is seen in Jesus’ prayer at the Last Supper, which included his prayer that his disciples be one so that the world would believe.

“A visible sign of our participation in the priesthood of Christ is our joining in Jesus’ eternal prayer, especially his prayer for the oneness of his disciples,” Rev. Gibaut said.

Cardinal Kasper said the search for unity requires “spiritual ecumenism,” a spirituality of prayer that finds its most public expression in the week of prayer.

Spiritual ecumenism includes undertaking the discernment needed to ensure that the practical steps taken to build unity are inspired by the Spirit and bring divided Christian communities closer to the truth, the cardinal said.

“The very goal is communion, but a communion which is not a pure human achievement, but a gift and above all a mystery,” he said.

Cardinal Kasper said it is clear that the original enthusiasm for ecumenism and the fast pace of early ecumenical agreements has slowed.

“In order to get matters moving again, an impetus is needed which is greater and stronger than human activities and academic conversations can be by their nature,” he said.

What is needed is an ecumenical spirituality, which is neither a feeling nor “an escape from and a substitute for an objective confession of faith,” Cardinal Kasper said.

Led by the Spirit, he said, the dialogue will be focused on a continually deeper understanding of Christ, counteracting “the danger of a spiritual relativism and syncretism which tends to compare the spiritual experiences of the different religions, to mix them up or to choose eclectically from them. It safeguards the uniqueness and universality of the salvific significance of Jesus Christ.”

A strong ecumenical spirituality also is the best defense against a temptation to create “an ecumenical hotchpotch” from different Christian traditions, compromising deeply held doctrines for an expedient appearance of unity, he said.

“So through the ecumenical dialogue, the Spirit leads us into the whole truth; he heals the wounds of our divisions and bestows us with full catholicity,” he said.