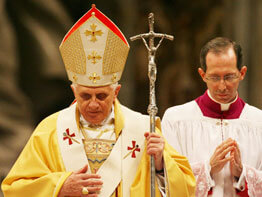 VATICAN CITY – Liturgical renewal launched by the Second Vatican Council is an “irreversible path” and has not been affected by Pope Benedict XVI’s concession on wider use of the Tridentine rite, a Vatican official said.

“The pope’s decision has so far not produced any change in the celebrative practice of our ecclesial communities. His gesture was only one of service to unity,” Archbishop Piero Marini, who arranged papal liturgies for more than 20 years, said in an interview April 25 in the Vatican newspaper, L’Osservatore Romano.

“Therefore let’s look ahead and let’s continue with enthusiasm the path undertaken by the council,” he said.

The archbishop remains involved in international liturgical issues, and he said a revision of the committee’s statutes is giving it wider authority over eucharistic congresses at the national and regional level, too.

Asked if Pope Benedict’s relaxation of restrictions on the use of the pre-Vatican II liturgy signaled a halt to the liturgical reform movement, Archbishop Marini said that was clearly not the pope’s aim.

The pope’s decree “does not intend to introduce modifications on the current Roman Missal or express a negative judgment on the liturgical reform desired by the council,” he said.

He said the decree, which reached out to disaffected Catholics, should be seen as an effort to maintain unity in the church.

Archbishop Marini said his own experience in organizing papal liturgies in more than 100 countries has convinced him that the liturgical reform movement has brought overwhelmingly positive results.

“Everywhere, the liturgy desired by the council was celebrated with lively participation and enthusiasm. Everyone understood the liturgy as proper to the local church and at the same time as an expression of the universal church,” he said.

Those liturgies also demonstrated that liturgical reform has solid theological foundations, he said.

“Therefore this is an irreversible path,” he said.

Liturgical celebration cannot be separated from the life of the church, the archbishop said, and this means “the church of today, not the church of yesterday or of tomorrow.”

At the same time, Archbishop Marini said celebrating the liturgy according to Vatican II is not an easy thing. It takes patience, perseverance and pastoral charity, he said.

One particular issue that has emerged during papal trips, he said, is the fact that some Masses are now attended by hundreds of thousands of the faithful. That raises practical considerations like the number of concelebrants, the distribution of Communion and the level of personal participation, he said.

Pope Benedict has already asked for reconsideration of the role of concelebrants, and Archbishop Marini said it makes sense to look at the question through a serious study and with eventual pastoral-liturgical guidelines.

Archbishop Marini looked ahead to the 49th International Eucharistic Congress in Quebec June 15-22, and he praised the local planning for the event. In particular, he said, Quebec Cardinal Marc Ouellet deserves credit for the enthusiasm, competence and commitment he has brought to the congress.

“I hope this congress will be a source of life and a sign of a renewed springtime in the church in Quebec, in Canada and in the whole world,” the archbishop said.