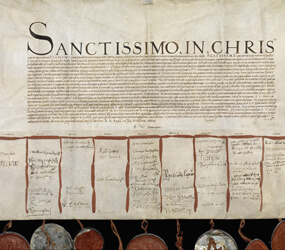 VATICAN CITY – A meticulous restoration and reproduction of a precious document from the Vatican Secret Archives brings new attention to one of the most complicated divorces in history – that of King Henry VIII from his queen, Catherine of Aragon.

The document, a letter written in 1530 by members of England’s House of Lords, other nobility and members of the clergy, urged Pope Clement VII to annul the royal marriage because it had not produced a male heir, and warned that with no clear succession England could be plunged into chaos and bloodshed.

Pope Clement, as history shows, did not grant the divorce, and the ensuing rift with Henry led to the establishment of the Church of England.

During a press conference in May, Bishop Sergio Pagano, prefect of the Vatican Secret Archives, gave reporters a rare opportunity to see the restored parchment bearing the letter to the pope signed by 84 nobles and clergy and weighed down with more than six pounds of wax from the seals notarizing each signature.

He also unveiled an accurate, handcrafted replica of the document produced by Scrinium, the Venice-based publishing house that collaborates with the Vatican archives on the restoration and reproduction for sale of choice documents.

Ferdinando Santoro, president of Scrinium, said the first reproduction of the letter will be given as a gift to Pope Benedict XVI, and that another 199 will be produced at the rate of about two a month. Each will sell for about $68,000, he said.

The Vatican document is in extraordinarily good condition, and is remarkable for the conservation of 81 of the original 85 red wax seals set in tin holders, and bound to the document with a single 40-meter-long silk ribbon that holds them in 13 vertical columns. Each seal has the heraldic symbol of the family and rank of the signer.

A twin original is kept in the British National Archives in Kew, but is mildewed, difficult to read and has lost its seals, said Vatican historian Marco Maiorino, who conducted a three-year study of the two originals plus a vast amount of supporting material regarding the contentious divorce.

The letter, he said, “perhaps like no other evidence, demonstrates the first act of that conflict between loyalty to the Church of Rome and loyalty to the king” faced by each of the letter’s signers.

Careful scrutiny and research of the seals by Vatican heraldic experts revealed new details about the identity of those who put their names to the document – willingly or not. Signers included two archbishops, two dukes, two marquises, 13 counts, four bishops, a viscount, 26 barons and 22 abbots – some 70 percent of the House of Lords at that time. Knights, courtiers, archdeacons and theologians made up the rest, Maiorino said.

When the letter was written in 1530, however, “the spiritual supremacy of Rome was not in dispute … the break was still in the future,” when diplomatic efforts failed and Henry took matters into his own hands, divorcing Catherine to marry Anne Boleyn, Maiorino said.

The reproduction will be presented at the Vatican June 24, the 500th anniversary of Henry’s coronation. It will be accompanied by a volume with the most recent historical research surrounding the letter.

Scrinium has collaborated on other projects with the Vatican Secret Archives; the most recent was a reproduction of the documents regarding the 14th-century trial of the Knights Templar. That volume sold for around $8,000.