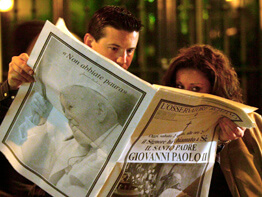 VATICAN CITY – The recent change at the helm of the Vatican newspaper marks an effort to revive a publication that has gone from glory days to malaise.

Founded 146 years ago, the daily L’Osservatore Romano once had a circulation of more than 60,000 and was considered a rich source of ecclesial news and critical commentary.

Today, the paper sells only a few thousand copies – on a good day. With few advertisements and more than 100 employees, it loses about $6 million a year.

In early October, Pope Benedict named Giovanni Maria Vian, a 55-year-old church historian and commentator, to replace Mario Agnes, 76, as the newspaper’s director. A new vice director also was named, adding to the expectation that L’Osservatore will get a serious makeover.

The newspaper functions in part as an official organ of information, publishing every word the pope says or writes, often under eight-column banner headlines like the recent: “Communion Favors Missionary Dynamism.”

The photo below the headline showed the pope addressing five bishops in a dimly lit room.

Some 46 years ago, Cardinal Giovanni Battista Montini – who later became Pope Paul VI – lamented that L’Osservatore’s grey pages and drab content were unlikely to grab the attention of an average newspaper reader.

He pointed out that there was no coverage of theater, sports, finance, fashion or criminal trials, and no comics or puzzles. Even the news stories, he said, were so sanitized that they seemed designed to shelter the reader from any distress or thrill and instead “train him in serenity and good mental hygiene.”

Cardinal Montini’s remarkably candid article, recently resurrected in the Web log, or blog, of Italian reporter Sandro Magister, was printed in L’Osservatore on its 100th anniversary in 1961. It was a rare act of self-criticism.

The daily newspaper hasn’t changed much since those days, except for losing more circulation. It is published in Italian (except for original-language versions of papal speeches and documents) and its pages are overloaded with Italian news.

Although a recent full-page ad showed Pope Benedict reading the newspaper, he would no doubt learn more about world events by reading the daily press summary prepared by the Secretariat of State.

There are two groups of professionals who pore over the pages of L’Osservatore with special interest, however: diplomats and journalists.

Diplomats read the paper for telltale indications of political shifts on global issues. The lead paragraphs of international news stories, for example, can reflect high-level input from the Vatican’s foreign policy experts. Or maybe not – that’s the problem.

In 2002, for example, an Israeli diplomat was shocked to read a L’Osservatore article that described Israeli incursions in the Palestinian territories as “an aggression that is turning into extermination.”
After quietly consulting with the Secretariat of State, the diplomat concluded that in this case the newspaper and the Vatican’s foreign policy experts were not on the same page.

In the 1990s, a diminutive Franciscan, Father Gino Concetti, churned out frequent commentaries on hot topics like abortion, euthanasia, homosexuality, artificial procreation and capital punishment.
Journalists reported on them, and their articles often began, “The Vatican today condemned … “ That once prompted Father Concetti to remark with a laugh, “I am not the Vatican’s moral voice.”
When the newspaper does want to emphasize that it speaks with the authority of high Vatican officials, it has a code: three asterisks at the bottom of the article.

The confusion over which articles reflect input from “on high” was addressed by Cardinal Montini back in 1961. He said there was constant doubt about the weight that can be attributed to news stories and commentaries. Some readers, he said, presume a “halo of reverence” around everything printed in L’Osservatore.

The newspaper’s new director, who takes office at the end of October, doesn’t want to talk about his plans yet. But many expect him to revamp L’Osservatore, shifting the focus from Italian to international events, making the paper more colorful and user friendly, and launching an expanded Web site.

The idea is to make better use of L’Osservatore’s position at the center of the universal church and its potentially rich network of sources.

Naturally, L’Osservatore Romano is not trying to remake itself as a typical Italian daily. The new management team knows the newspaper always will be an instrument of formation as well as information – but only if people read it.