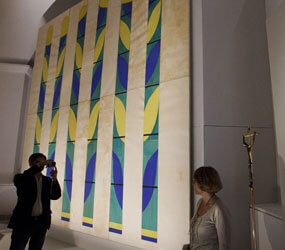 VATICAN CITY – After languishing in storage for more than 30 years, three giant collages and other works by French artist Henri Matisse have been given a permanent home in the Vatican Museums.

The new space dedicated to the cartoons, models and other preparatory work Matisse did for a small chapel in Vence on the French Riviera opens June 22 in the modern art wing of the museum complex.

Museum director Antonio Paolucci said in a news conference June 21 that the collection was donated to the Vatican galleries in 1980 by the artist’s son, Pierre. A lack of funding and proper space was behind the long delay in displaying the work, he said.

Paolucci said the enterprise that the elderly and ailing Matisse undertook from 1947 to 1951 for the Chapel of the Rosary demonstrated the “genius, creative fantasy and optimism” that characterized his work. The artist, who had been a protagonist of many of the great changes in art in the 20th century but was not religious, considered the chapel his masterpiece, Paolucci said.

Matisse threw himself into the chapel project after his former nurse and model became a nun and asked him to contribute to the chapel for her Dominican chapter. He designed the windows, decorations, a crucifix and even priestly vestments, Paolucci said.

On display are giant cartoons – yellow, blue and green models for the stained-glass windows that Matisse made in the collage style for which he was famous. There is also the original drawing of a large Mother and Child surrounded by leaf decorations that was executed on white tiles in the chapel, and a simple bronze crucifix he designed.

Other items in the collection, including five chasubles and letters regarding the project between Matisse and the Dominican chapter superior, will be shown on a rotating basis.

Curator Micol Forti said that only after lengthy studies did the Vatican Museums laboratories come up with high-tech air conditioning and lighting systems that would create the proper atmosphere and protect the very delicate nature of the collection.