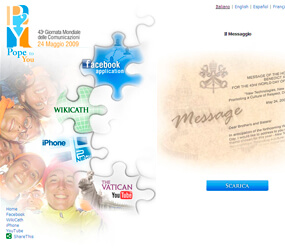 VATICAN CITY – The Vatican is launching iPhone and Facebook applications in an effort to help Catholics, especially younger generations, use new technologies to create a culture of dialogue, respect and friendship.

The new applications are part of a brand new Vatican Web site – www.pope2you.net – that was to go live on World Communications Day, which will be celebrated May 24 in most dioceses.

Sponsored by the Pontifical Council for Social Communications, the new site was created to help attract young people to and spread Pope Benedict XVI’s message for World Communications Day, the head of the council, Archbishop Claudio Celli, told reporters May 18.

This year’s communications day message is dedicated to “New Technologies, New Relationships: Promoting a Culture of Respect, Dialogue and Friendship.”

“We thought that it was good to present the message to the young generation through technologies that they know how to use,” the archbishop said during a press conference unveiling the new site.

“The pope is inviting us to promote a culture of dialogue, of respect and friendship,” especially among young people, he said.

“We think this pontifical council itself has to use new technologies to promote new relationships around the world,” he said, adding that “we must take advantage of what the new technologies are offering us at this very moment.”

Pope Benedict XVI, meanwhile, urged everyone, especially young people, to use the new media “in a positive way and to realize the great potential of these means to build up bonds of friendship and solidarity that can contribute to a better world.”

During his weekly general audience in St. Peter’s Square May 20, the pope said new communications technology has brought about a fundamental shift in how information is spread and how people communicate and relate to one another.

He asked all those “who access cyberspace to be careful to maintain and promote a culture of respect, dialogue and authentic friendship where the values of truth, harmony and understanding can flourish.”

He also called on young people to “bear witness to your faith through the digital world.”

“Employ these new technologies to make the Gospel known, so that the good news of God’s infinite love for all people will resound in new ways across our increasingly technological world,” he said.

Archbishop Celli said the pope’s World Communications Day message inspired the council to create a simple, fresh site to work as a hub from which users can find some new ways the universal church is present in the digital world.

The site offers viewers a link to a new application on the social networking site Facebook.

Titled “The Pope Meets You on Facebook,” the new Pope2You application lets people send and receive “virtual postcards” of Pope Benedict along with inspiring text culled from the pope’s various speeches and messages.

Archbishop Celli said there are about 20 different postcards to choose from but that they hope to offer more selections later so that people can “spread around the messages and insights from the Gospel.”

The Pope2You site also links viewers to a new way for people to receive news about the Vatican and the pope through their iPhones or iPod touch portable music players.

In conjunction with the Vatican Television Center and Vatican Radio, H2Onews will distribute audio and video reports exclusively through the iPhone in eight different languages, including Chinese.

It is “the first application of video news dedicated to the Catholic world, through which you can follow the travels and speeches of Benedict XVI” as well as major Vatican events, the Pope2You site says.

The news clips of the pope and the Vatican will be the same ones currently offered on the Vatican’s video channel on YouTube, unveiled in January.

The main Pope2You site also offers a direct link to the Vatican’s channel on YouTube and a Wiki link that lets readers study the pope’s 2009 communications message.

There is also a five-minute video presentation of Archbishop Celli explaining the new site and its purpose.

The archbishop said even though the new site was meant just to mark the occasion of World Communications Day Vatican officials are waiting for user feedback to see whether the site will become permanent.

“Right now we don’t have a program or idea for the future (of the site), but if young people respond positively to the initiative then we’ll see what to do in the future,” he said.

The site and its applications were developed by Italian Father Paolo Padrini, a diocesan priest from Tortona. He also helped develop the iBreviary application for the iPhone and the Catholic Facebook application called Praybook, which allows users to access and share with others traditional Catholic prayers and texts from the Liturgy of the Hours.