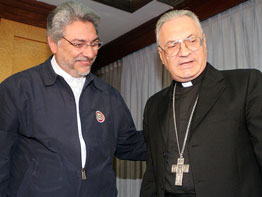 ASUNCION, Paraguay – The Vatican has laicized a bishop elected Paraguayan president, allowing him to take office in August without violating church law, said the papal nuncio to Paraguay.

“The pope has granted him the loss of his clerical status … he’s a layman now,” said Archbishop Orlando Antonini, the papal nuncio, at a press conference July 30.

Fernando Lugo, who became known as “the bishop of the poor,” was elected president of Paraguay April 20 after campaigning against corruption and for greater equality for the country’s indigenous people and poor peasant farmers. When Lugo takes office Aug. 15, he will end the more than 60-year rule of the Colorado Party.

“This is the first case within the church in which a bishop receives a dispensation,” said Archbishop Antonini. “Yes, there have been many other priests the pope has left in the status of layman, but never a member of the hierarchy until today.”

The archbishop added, “It’s a great pain for the church to lose a bishop, a priest whom we tried to dissuade from the political option up to the last day of his election campaign.

“But the Holy Father recognized that he was elected by the majority of the people to lead Paraguay for the next five years,” he added.

The Vatican initially opposed Lugo’s campaign, and the day after the election Lugo asked forgiveness of the church “if my attitude and my disobedience caused pain.”

Three days later, Archbishop Antonini visited the president-elect to congratulate him and present him with a pen that was a gift from Pope Benedict XVI.

In addition to holding the press conference, Archbishop Antonini also released a copy of the decree of laicization signed June 30 by Cardinal Giovanni Battista Re, prefect of the Congregation for Bishops.

The decree said that Lugo had written to the Vatican Dec. 18, 2006, asking to be released from the clerical state in order to run for president, but also asking that his request not be seen as a sign of the loss “of my love for the church nor of my esteem for ministerial service and religious life.”

Cardinal Re said the Vatican, trying to dissuade the bishop from running for office, suspended him from the exercise of his priestly ministry.

Given the fact that he continued his campaign and won the election, Cardinal Re said, “for the good of the country” and to demonstrate clearly to the faithful the fact that the offices of president and bishop are incompatible, the Vatican authorized publication of the decree.

“In effect, accepting the office of president of the Republic of Paraguay is not compatible with the obligations of episcopal ministry and the clerical state,” the cardinal wrote.

Cardinal Re said Pope Benedict examined the case carefully and released the bishop from the clerical state “with the consequent loss of the rights inherent in it, dispensing him at the same time from the religious vows he made in the Society of the Divine Word, from the obligation of celibacy and from the other obligations of the clerical state.”

“The supreme pontiff asks Mr. Fernando Armindo Lugo Mendez to be faithful to the Catholic faith in which he was baptized and to live a life coherent with the Gospel,” the cardinal’s letter said.