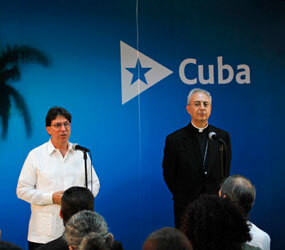 VATICAN CITY – The whole question of a separation between church and state originated with Jesus, who told believers they must give to God what belonged to God and to Caesar what belonged to Caesar, the Vatican’s foreign minister told a gathering in Cuba.

Without the Gospel, the fundamental distinction between the religious and secular spheres “would not have entered into the history of humanity,” Archbishop Dominique Mamberti said June 16 in Havana, opening a weeklong series of conferences on Catholic social teaching.

Addressing Cuban government officials, members of the diplomatic corps, bishops and laity, Archbishop Mamberti said it was obvious that church-state relations have been different throughout history and across cultures.

But, he said, it is clear that secularism and the secular state are terms that often take on “a nuance of or the acceptance of an opposition to the church or to Christianity.”

“In this regard, one cannot forget the fact that in the name of this concept (separation of church and state) decisions are sometimes made or norms sometimes enacted that objectively damage the person and communal exercise of the fundamental right to religious freedom,” he said.

Although Cuba has a strong Catholic heritage, under communism the church has faced serious restrictions. Church-state relations have shown improvement in recent years, but only slowly.

The Vatican released the text of Archbishop Mamberti’s talk June 18.

A healthy form of church-state separation, he said, establishes an atmosphere of respect for the proper role of each and of cooperation in promoting the good of all citizens.

“Respect for the principle of secularity requires Catholics to recognize the just autonomy of the temporal reality” and to “avoid any type of confusion between the religious sphere and the political sphere,” he said.

But it also means that the state must not try to control religion, convince people to give up their faith or exclude believers from participating in public life, he said.

When the secular nature of the state is exaggerated, “paradoxically, the state becomes the state religion and it is no longer secular because secularism is its supreme value, its dominant ideology, a kind of religion, perhaps even with its own civil rites and liturgies,” Archbishop Mamberti said.

It is not enough for a government to recognize the right of an individual citizen to believe in God, he said. True respect for the whole person means recognizing that person’s need to share his or her faith with others and to live its values at home and in society, he explained.

The church’s respect for the autonomy of governments, the archbishop said, also does not mean Catholics will sit by silently when a proposed law or policy clearly violates ethical norms or would harm the dignity of the human person.

“Unfortunately, history demonstrates with abundant examples the harmful consequences of forms of governments and states that considered themselves to be superior to laws and moral values,” he said.

Basic moral values, the archbishop said, are not religious doctrines but are human values that anyone with a good heart and good will can recognize.

Still, “the presence of Christians in society is a leaven that keeps society’s attention tuned to the need to pursue the authentic common good,” he said.