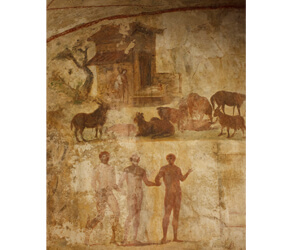 While early Christian catacombs offer clearer examples of early Christian iconography, the burial chambers of the Aureli family are more complicated and confusing in that they mix pagan, Christian and Gnostic symbolism, representing “an evolving cultural process” at work in Rome at the time, said the secretary of the Pontifical Commission for Sacred Archaeology at the unveiling of the tomb June 9.

The figures on the tomb’s walls are “the first step toward the religious transformation of the city” of Rome, from being a rich mix of pagan cults, Jewish thought and Christianity to a culture that came to embrace Christianity both as a religion and a new source of ideas and art, said Monsignor Giovanni Carru, commission secretary.

The white walls of the three burial chambers are decorated with great philosophers, colorful animals and bucolic scenery, and scenes from Homer’s “The Odyssey.”
There are also fragmentary images of a woman seated with a snake underfoot and a man creating smaller men by his side.

There is much debate over who these figures could be: either Eve in the Garden of Eden and the creation of Adam or a nymph in the garden of the Hesperides and Prometheus creating man, said Fabrizio Bisconti, the commission’s archaeological superintendent.

But no matter what the personalities the figures represent, Bisconti said, the overarching theme throughout the multilayered tomb is one of awaiting the afterlife, being “suspended in the cosmos,” balancing between the earthly world and a supernatural one, all of which is fertile ground for the Christian world of heaven.

The iconographic mix shows the multireligious and tolerant climate that reigned between the second and third centuries and before the persecutions of Christians by emperors Valerian and Diocletian intensified, Bisconti said.

The tomb of the Aureli family was discovered in 1919 when workmen were digging to build a garage. Today the tomb is located under an enormous car showroom of the Italian carmaker, Fiat, in the center of Rome just inside the Aurelian walls on Viale Manzoni.

Because burial sites were always built outside the city walls, the date of the tomb is set at early third century to A.D. 250 – well before the nearby Aurelian Walls were completed in 273.

The Vatican’s archaeological commission is in charge of the site and just finished an extensive restoration.

Restoration work lasted more than a decade and much time had been spent trying to delicately chip off a stubborn crust of calcium carbonate that had created a thick white “veil” over the images, obscuring the details and dulling the colors, said Barbara Mazzei, who was in charge of the restoration work.

Several months ago, Vatican restorers started using a sophisticated laser on the walls to flake of the crust without damaging the underlying paint; it was the same laser technique they used with tremendous success a few years ago on other Roman catacombs.

However, in an interview with the Vatican newspaper, L’Osservatore Romano, Mazzei said they ran into a problem with the Aureli paintings because the laser darkened any image that was painted with the red mineral cinnabar.
They switched to a new kind of laser that could be recalibrated better and treat every surface without altering the colors made from cinnabar, she said.
The success of the new technique meant restorers were able to uncover a surprising image from “The Odyssey” in which Ulysses’ men – in a cloud of smoke and flame – are transformed back from swine into men.

The tomb is only open to small groups of people who make a reservation with the Pontifical Commission for Sacred Archaeology.