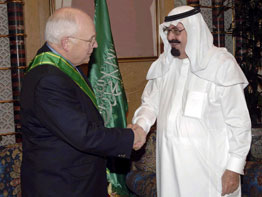 VATICAN CITY – The importance of marriage and the family and the values needed to sustain family life can be an appropriate starting point for interreligious dialogue, said an official of the Pontifical Council for the Family.

Franciscan Father Gianfranco Grieco described as “interesting” Saudi Arabian King Abdullah Aziz’s idea to initiate a dialogue with Muslims, Christians and Jews to defend the family, moral values and the importance of religion.

While Saudi Arabia is a strictly Islamic country where the public practice of any other faith is illegal, King Abdullah announced March 24 that he had been consulting Muslim religious leaders about the possibility of inviting “all religions to sit together with their brothers, faithfully and sincerely, as we all believe in the same God” to discuss “the crisis all humanity is suffering in the current time.”

The institution of the family has been “weakened and dismantled,” a lack of faith and religious practice has spread and “there is a lack of ethics, loyalty and sincerity,” he said.

The king’s speech, published in English by the official Saudi Press Agency, said that after more consultations with Muslim leaders he hoped to convoke meetings with Christians and Jews because the Bible and the Torah, like the Quran, contain teaching that would help humanity defend itself against “those who tamper (with) religions, ethics and family systems.”

The king said the pope “warmly welcomed me” in “a meeting of a human to a human, which I would never forget.”

Commenting on the king’s proposal, Father Grieco told Catholic News Service March 27, “Everything that helps family stability, values and education from whatever source – Christian, Muslim or Jewish – is good. We all know the importance of the family.”

The king’s concern, he said, shows that the family is experiencing a crisis in many parts of the world, not just in the West.

The fact that the idea for the dialogue came from a king whose country does not respect freedom of religion and worship is a concern, Father Grieco said, “but that situation cannot be changed overnight. We must meet, talk and get to know one another.”

“If the point of departure is the family, I think it is a good starting point,” he said. “That which unites us must be our focus, especially for the future of our children, of humanity.”

Cardinal Jean-Louis Tauran, president of the Pontifical Council for Interreligious Dialogue, was unavailable for comment.