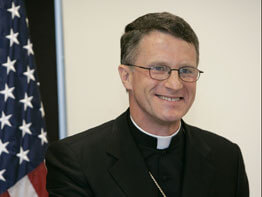 WASHINGTON – Pope Benedict XVI has named Archbishop Timothy P. Broglio, a Cleveland native who is apostolic nuncio to the Dominican Republic and delegate to Puerto Rico, to head the U.S. Archdiocese for the Military Services.

The appointment was announced in Washington Nov. 19 by Archbishop Pietro Sambi, apostolic nuncio to the United States.

“I am indeed privileged to take the reins from Archbishop O’Brien,” said Archbishop Broglio at a Nov. 19 news conference at the military archdiocese’s headquarters in Washington.

The new military archbishop, who has never been in the armed forces, said he has encountered members of the military in countries where he served in the diplomatic corps. He said his primary goal as military archbishop will be to find more chaplains. Currently there are about 300 Catholic military chaplains serving U.S. troops.

“The greatest resource of our (archdiocese) is our priests,” Archbishop Broglio said. “Chaplains are committed to letting the light of Christ shine.”

Archbishop Broglio has a career that is closely associated with Rome, where he was ordained a priest of the Diocese of Cleveland May 19, 1977, by Cardinal Sergio Pignedoli and ordained to the episcopacy by Pope John Paul II March 19, 2001.

In 1976 he earned a bachelor’s degree in theology from the Pontifical Gregorian University in Rome and pursued additional studies in biblical theology. Following his ordination he returned to the Cleveland Diocese to serve as an associate pastor at St. Margaret Mary Parish in South Euclid, Ohio. He later called that assignment “the best two years of my life.”

He returned to Rome in 1979 to study at the Pontifical Ecclesiastical Academy, the Vatican’s school for diplomats. He graduated from the academy in 1983, the same year he completed a doctorate in canon law at Gregorian University.

Archbishop Broglio is to be formally installed as head of the military archdiocese Jan. 25 at the Basilica of the National Shrine of the Immaculate Conception in Washington.

In the new post, he will be in charge of the spiritual, pastoral and sacramental care of the 375,000 Catholic active-duty U.S. military personnel and their 800,000 family members; 200,000 Catholics in the Reserves and National Guard; 30,000 Catholic patients in 172 Veterans Affairs hospitals; and 66,000 Catholics in government service overseas in 134 countries.

Contributing to this story was Meredith Black in Washington.