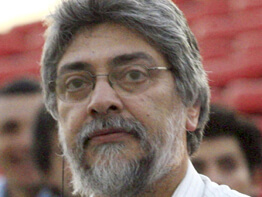 VATICAN CITY – The Vatican turned down a laicization request from a Paraguayan bishop who wants to run for president and suspended the bishop from exercising his priestly ministry.

Bishop Fernando Lugo Mendez of San Pedro, Paraguay, 57, had announced Dec. 25 that he would ask the Vatican to return him to the status of a layman so he could run for president.

Cardinal Giovanni Battista Re, prefect of the Congregation for Bishops, responded in December with a formal warning that running for public office would “be in clear contrast with the serious responsibility of a bishop of the Catholic Church” and would carry sanctions.

Vatican Radio reported Feb. 1 that Cardinal Re informed Bishop Lugo in a Jan. 20 letter that his request to return to the lay state had been denied because “the episcopacy is a service accepted freely forever.”

However, the radio said, because of Bishop Lugo’s decision to continue his political activity, Cardinal Re also informed him that he had been suspended from exercising his ministry as a bishop and priest.

Despite the suspension, Cardinal Re reminded Bishop Lugo that he “remains in the clerical state and continues to be bound by its obligations,” Vatican Radio said.

The radio also reported that Cardinal Re had told Bishop Lugo that the task of a bishop is to lead the faithful and to work “for the salvation of souls and not to govern a political community.”