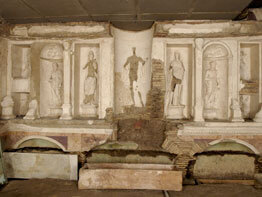 VATICAN CITY – The Vatican has completed the restoration of the largest and most luxurious mausoleum in the vast necropolis under St. Peter’s Basilica.

The Mausoleum of the Valerii displays some of the most ornate decoration among the 22 family mausoleums in the ancient underground cemetery.

“We had wanted to restore it for a long time, but we didn’t have the money. Now we’re extremely happy” the funding came through and the yearlong restoration has been completed, said Maria Cristina Stella, an official at the Fabbrica di San Pietro, the office responsible for the basilica’s upkeep.

The $300,000 project was funded by the Rome-based Foundation for Music and Sacred Art, the Italian branch of Mercedes-Benz, and other sponsors.

Ms. Stella and other Vatican officials spoke at a May 27 press conference at the Fabbrica’s headquarters near the basilica.

The Vatican necropolis includes the burial grounds where St. Peter’s tomb has been venerated since early Christian times.

The Valerii mausoleum was built sometime after 160 by Gaius Valerius Herma – a wealthy, highly educated Roman slave who had bought his freedom. He built the site for his family and his freed slaves and their descendents.

Like many other pagan tombs in the necropolis, the sarcophagi were later “recycled” by Christians who buried their loved ones and added inscriptions referring to Christ.

The cemetery had been used until the fourth century when the emperor Constantine had workmen fill in the open-air necropolis with dirt in order to lay the foundation for building a basilica above St. Peter’s tomb. The airless, lightless atmosphere actually had helped preserve much of the artwork and statuary.

They pieced together broken plaster or marble fragments back onto statuary tucked into niches lining the mausoleum walls.

Ms. Stella said what makes this mausoleum stand out from the others is its “uniform use of stucco” for artistic rather than architectural reasons and the large number of life-size plaster figures that are almost three-dimensional bas-reliefs.

More than a dozen figures in the various niches and “lunettes” above the sarcophagi have been either partially or completely preserved. Inscriptions and elegant stucco decorations indicate each buried relative’s name and interests when he or she was alive.

One elderly male figure holds a tablet in one hand while writing implements are depicted in the lunette above him. Above one younger female figure are bas-reliefs of a mirror and a jewelry case and above an older female is a spindle, basket and ball of yarn.

Many Roman gods and goddesses decorate the walls. Hypnos, the god of sleep, has the wings of a bat and is surrounded by two similarly winged cherubs who are holding a gilded cornucopia filled with poppy seeds.

The second-century subterranean burial ground is two levels below the basilica floor, and St. Peter’s tomb is directly under the basilica’s main altar.

The cemetery was excavated for the first time in the 1930-40s, revealing a double row of mausoleums and niches decorated with paintings, stucco and mosaics, along with a section of simpler graves.

The Vatican has spent the past decade repairing and restoring the tombs, labyrinthine lanes and funerary artwork using state-of-the-art techniques, as well as setting up a complete conservation system that controls the climate of the necropolis.

Visitors interested in seeing the necropolis must make reservations in writing in advance either by stopping at the excavations office or by sending a letter. Vatican guides escort groups of 10-15 people through the site.