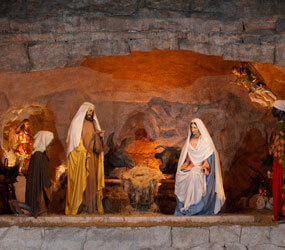 VATICAN CITY – While snowfall is a rarity and Santa Claus is seldom seen, Christmas at the Vatican is truly unique.

Cranes erect an enormous evergreen alongside the granite obelisk in St. Peter’s Square and workers nested in cherry picker buckets adorn the tree with lights, ornaments and tinsel.

This year’s tree is decorated with 3,000 gold and silver balls, and 1,500 white and yellow LED lights, which have lower energy consumption and greater durability. The tree will be topped with a flashing star.

Construction of the larger-than-life nativity scene takes weeks and yards of thick burlap keep curious eyes from seeing the final product until its unveiling on Christmas Eve.

But even further from the public eye are the holiday traditions of the papal household. While Pope John Paul II had close to an open-house attitude, Pope Benedict XVI is much more discreet.

In addition to the public events, Pope Benedict celebrates Christmas privately with the members of his papal household.

“We celebrate Christmas together, listen to the holiday music, and exchange gifts,” he said in the recent book-length interview “Light of the World.”

The close-knit papal family includes Pope Benedict’s two secretaries and a small group of women from the Memores Domini lay community who care for the papal apartment. Unfortunately, this holiday season is marked with the loss of one of the pope’s close collaborators, Manuela Camagni, who died Nov. 24 after she was struck by a car.

Thaddaeus Jospeh Kuehnel, a German banker in Munich, has spent the past 28 years hand delivering the pope’s favorite sweets and sausages from Bavaria.

Kuehnel told Catholic News Service he was driving to Rome the week before Christmas to deliver Bavarian sausages from the pope’s favorite restaurant, Franziskaner; special mustard; and sweets from the Zentis food company, which specializes in marzipan and jams.

The papal goodie bag also includes cakes and cookies that cloistered nuns baked specifically for the pope, Kuehnel said in a Dec. 8 interview.

He will load his car with five Bavarian Christmas trees for the pope and will personally deliver the gifts and have dinner with the pope, he said.

On Christmas Day itself, no special guests are expected and the main meal, lunch, is made up of “Italian food,” said Jesuit Father Federico Lombardi, Vatican spokesman.

The pope’s brother, Monsignor Georg Ratzinger, will arrive at the Vatican Dec. 28 to spend a few weeks with the pope. Father Lombardi said Dec. 28 is the date then-Cardinal Joseph Ratzinger always would leave Rome for Germany to spend the holidays with his brother, so they have kept the same date of reunion.

All of the trees adorning the various Vatican offices and hallways, including the pope’s, are decorated by the technical services department of the Vatican City governor’s office, said Pier Carlo Cuscianna, department director.

The department also provides the figurines and creche supplies for one of the papal household’s Nativity scenes, but the pope and his personal assistants “put it together as a family,” Cuscianna told CNS.

Father Lombardi said the pope has three different Nativity scenes in the papal apartment: a large one in the hallway set up by the Vatican workmen; one under the Christmas tree in the living room, where the pope puts the baby Jesus just before celebrating Midnight Mass in St. Peter’s Basilica; and one in the dining room, which has belonged to the pope for the past 45 years.

The large Nativity scene in St. Peter’s Square is unveiled Dec. 24, and while the pope can see it from his apartment window, he doesn’t visit it until after his New Year’s Eve thanksgiving prayer service.

The core figures in the scene – the Holy Family and the Magi – come from St. Vincent Pallotti, who had them on public display in a Rome parish starting in 1842.

Another Nativity scene is on display inside St. Peter’s Basilica. That creche is constructed by the basilica’s workmen, known as “sanpietrini,” who compete with the workers in the square in trying to build the more spectacular representation of Jesus’ birth, one of the “sanpietrini” told Vatican Radio.

Carlo Stella, one of the workmen in the basilica, said they try to introduce new elements into the scene each year, and the 2010 addition is a mechanical kneeling shepherd who lifts his hat before the Christ child.

The wooden statues were carved by a German sculptor, but the Vatican workmen fire and paint the clay chicken, ducks and sheep figurines themselves, Vatican Radio reported.

About a dozen carpenters, bricklayers, plumbers and electricians work two to three weeks straight to get it ready in time for Christmas Eve when Pope Benedict will personally place the baby Jesus in the manger at the end of Mass Dec. 24.

Almost every Vatican office has its own Nativity scene, some made from unusual materials.

The Swiss Guards, for example, use eight German beer crates for the scene’s base and an empty munitions box for the grotto to symbolize that the only weapon a Christian needs is Christ.