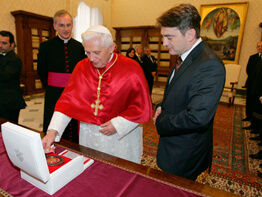 VATICAN CITY – An accord designed to guarantee religious rights and freedoms for the Catholic Church in Bosnia-Herzegovina formally went into effect Oct. 25 during a special ceremony at the Vatican.

After meeting with Pope Benedict XVI, Zeljko Komsic, a Catholic Croat and president of the rotating presidency of Bosnia-Herzegovina, formally exchanged documents marking ratification of the accord, or concordat, with Vatican officials.

Komsic, 43, underlined the importance of the concordat with the Vatican, saying it provides the legal framework for guaranteeing the right of the Catholic Church to carry out its activities in the country.
Cardinal Tarcisio Bertone, Vatican secretary of state, called the occasion “a historic day in relations” between the two states.

The accord with Bosnia-Herzegovina – a multiethnic, multireligious war-torn nation – “represents a positive development in the consolidation of a rule of law and the democratic principles Bosnia-Herzegovina wants to forge its future upon,” Cardinal Bertone said.

The finalized concordat will help bolster the country’s international image and “will contribute to overcoming the serious problems inherited from the past and building a better future,” the cardinal said.

Bosnian bishops have been warning that Catholics in this Balkan nation have become like second-class citizens and, in some regions, are on the verge of extinction.

While the 1995 Dayton peace accords brought an end to ethnic violence among Serbs, Muslims and Croats, the country’s bishops have said the mostly Catholic Croat community is powerless and faces discrimination in a nation still divided along ethnic lines.

Komsic, who currently heads the presidency of Bosnia-Herzegovina, which rotates every eight months, fought in the country’s 1992-1995 war before entering politics.

In his speech to Vatican officials, he said “we will not forget” the important and urgent calls Pope John Paul II made to end the violence and work for peace.

In speaking with journalists immediately after his private meeting with the president, Pope Benedict said the Balkans was a region “with many problems, but also much hope.”

The Vatican also issued a statement acknowledging Komsic had invited the pope to visit Bosnia-Herzegovina – a country in which Muslims make up 40 percent of the population, Orthodox 31 percent and Catholics 15 percent.