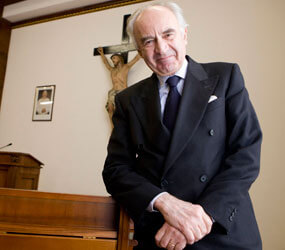 VATICAN CITY – The president of the Vatican bank, Ettore Gotti Tedeschi, has been placed under investigation by Italian magistrates in a money-laundering probe, the Italian state television RAI reported.

RAI, citing judicial sources, said the move followed the seizure Sept. 20 by Italian treasury police of 23 million euros (US$26.3 million) that had been deposited in a Rome bank account by the Vatican bank.

The Vatican expressed “bewilderment and amazement” at the legal action, saying its operations were legitimate and documented.

Last fall, Pope Benedict XVI named Gotti Tedeschi, an Italian banker and professor of financial ethics at the Catholic University of the Sacred Heart in Milan, as president of the Vatican bank, known formally as the Institute for the Works of Religion. The appointment was seen at the time as a move toward greater transparency in the bank’s operations.

According to the RAI report, no proof of money-laundering had emerged in the probe, but investigators said the Vatican bank had failed to disclose information about banking operations as mandated by Italy’s 2007 law against money-laundering. It said a second unnamed official of the bank was also under investigation.

A statement issued by the Vatican’s Secretariat of State Sept. 21 said the Vatican bank was committed to “full transparency” in its operations and had been actively working for some time with Italian and international authorities to comply with procedures that ensure funds are not used for terrorism or money-laundering.

It said the necessary information on the particular banking operations being probed were readily available to investigators.

“The Holy See therefore wants to express the maximum trust in the president and director general of the IOR,” the statement said.

The Vatican bank was involved in a major Italian banking scandal in the 1980s, when fraud led to the collapse of Italy’s Banco Ambrosiano. Although denying wrongdoing, Vatican bank officials made what they called a “good-will payment” of about $240 million to the failed bank’s creditors.