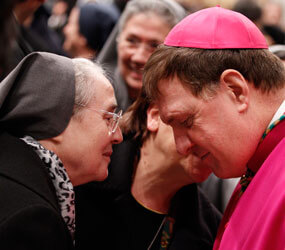 VATICAN CITY – In the final stage of the apostolic visitation of U.S. women’s religious communities, the Vatican congregation overseeing the study not only is facing mountains of paper, but must try to rebuild a relationship of trust with the women, said the congregation’s secretary.

U.S.-born Archbishop Joseph W. Tobin, secretary of the Congregation for Institutes of Consecrated Life and Societies of Apostolic Life, said, “I believe a visitation has to have a dialogical aspect, but the way this was structured at the beginning didn’t really favor that.”

In an interview Aug. 10 with Catholic News Service, Archbishop Tobin said the congregation hoped its review of the visitation reports and its responses to the participating religious communities would be marked by dialogue and would be a step toward healing.

“I’m an optimist, but also trying to be realistic: The trust that should characterize the daughters and sons of God and disciples of Jesus isn’t recovered overnight. I think women religious have a right to say, ‘Well, let’s see,’“ he said.

The former prefect of the congregation, Cardinal Franc Rode, initiated the visitation in January 2009, saying its aim would be to study the community, prayer and apostolic life of the orders to learn why the number of religious women in the United States had declined so sharply since the 1960s.

Almost a year into the study, Cardinal Rode told Vatican Radio that the investigation was a response to concerns, including by “an important representative of the U.S. church” regarding “some irregularities or omissions in American religious life. Most of all, you could say, it involves a certain secular mentality that has spread in these religious families and, perhaps, also a certain ‘feminist’ spirit.”

Archbishop Tobin said Mother Mary Clare Millea, superior general of the Apostles of the Sacred Heart of Jesus and the apostolic visitor appointed by the Vatican, has submitted her “overall draft report,” but the congregation is expecting another 400 reports from the sisters who visited each community and from many of the communities themselves.

The congregation, which has a staff of 40, including only three native English speakers, will need help reading, assessing and responding to the reports, he said.

One possibility, Archbishop Tobin said, is to ask religious congregations based in Rome to allow U.S. members of their general councils to serve as consultants to the congregation and help go through all the reports.

The fact that Cardinal Rode had decided the visitors’ reports would not be shared with the individual communities was only “part of the real harm done at the beginning,” Archbishop Tobin said. The situation was exacerbated by “rumors and, I would say, some rather unscrupulous canonical advisers exploited that” by sowing fear that the Vatican would replace the leadership of some communities or dissolve them altogether.

“It’s like Fox News, they keep people coming back because they keep them afraid,” Archbishop Tobin said.

“But certainly, on our side of the river or our side of the pond, we had created an atmosphere where that was possible,” and where the idea that some communities would be closed down “didn’t seem to be so outlandish.”

“It’s like preaching; it’s not what you say, it’s what they hear … and what a lot of these women heard was someone telling them their life was not loyal and faith-filled,” he said.

In the end, though, many congregations found the process was not as bad as they feared, he said, and “an important outcome that is already happening is that there is a growing number of women religious in the States who say, ‘We need reconciliation, but it has to happen among ourselves. It can’t be imposed by the Vatican.’“

Archbishop Tobin said reconciliation is needed within and among communities, including between those represented by the Leadership Conference of Women Religious and the Council of Major Superiors of Women Religious, which stereotypically are seen, respectively, as very progressive and very conservative.

“The visitors themselves were from the two different groups, and they found out from talking to each other that the caricatures weren’t accurate,” he said.