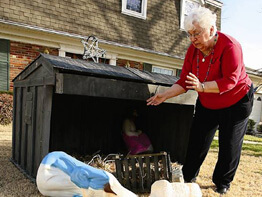 Loretta Hoffman of Timonium looks over her Nativity scene that was vandalized during the early morning hours of Jan 4. (CR Staff/Owen Sweeney III)|

Standing next to toppled plastic figures of St. Joseph, the Blessed Virgin Mary and assorted sheep, Loretta Hoffman shook her head sadly and pointed to an empty manger flipped on its side by vandals.

“That’s where the baby Jesus was,” she said, noting that her husband, Gil, had secured the figure with wires to prevent the wind from knocking it over. “They ripped it out and they took it. It makes me sad.”
Because Jesus seemed to be a particular target, Mrs. Hoffman is convinced that the vandalism on her front lawn in Timonium is more than the handiwork of youthful pranksters. The parishioner of Immaculate Conception in Towson thinks she is the victim of a hate crime.

“I feel violated by it,” said Mrs. Hoffman, wearing a silver miraculous medal around her neck and patting her hand on the downed figures. “I believe it was part of the war on Christmas.”

Mrs. Hoffman first noticed the vandalism the morning of Jan. 4, the same day she reported it to the Baltimore County Police Department. Like her family has been doing for some 20 years, Mrs. Hoffman had planned to display the Nativity scene until the Feast of the Baptism of the Lord.

“We don’t bother anyone,” she said. “We just wanted to give public witness to our faith.”

According to the New York-based Catholic League for Religious and Civil Rights, attacks on nativity scenes are becoming more common. Catholic League president William Donohue said this year was “the worst we’ve seen.”

A baby Jesus figure was stolen in Plaistow, New Hampshire, and later returned wearing a pair of horns, according to the Catholic League.

In Sioux Falls, South Dakota, someone crushed the face of a Jesus statue. In Chicago, 32 figures of the baby Jesus were stolen and dumped on the lawn of a Catholic church. And in an incident in Des Moines, Iowa, the Catholic League reported that the face of the infant Jesus was doused with red nail polish, with an electrical cord wrapped around the neck.

Mrs. Hoffman said she forgives the person or persons who vandalized her property. Her husband had planned to continue lighting the toppled figures to remind neighbors that Christianity is “under attack.”
“This isn’t going to scare us,” she said. “We’ll put it up again next year.”

In the meantime, she said, Mrs. Hoffman would like to have the baby Jesus returned unharmed.