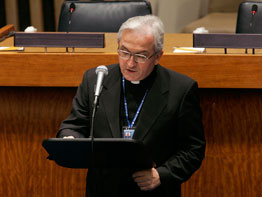 UNITED NATIONS – The global community must work together to recognize “the centrality of humans in all aspects of political and technological development,” the Vatican representative at the United Nations said Sept. 29 during general debate at the 63rd session of the U.N. General Assembly.

Archbishop Celestino Migliore focused his talk on a “preoccupation and inconsistency that exist today in the realm of international and national law, namely, that all that is technically possible must be legally licit.”

He said the global approach to climate change reflects a belief that “not all environmental activity should be allowed and sanctioned by law because it is technically possible and economically profitable.”

“Indiscriminate deforestation, the dumping of radioactive waste and invasive and devastating acts of nature are often more expedient and technically possible, but because they provoke our consciences as well as our responsibility toward creation, we come to the decision to invoke the principle that even though it is possible it should not be legally licit,” Archbishop Migliore said.

But the approach changes “when passing from the ecological field to that of humans,” he said.

“Whether it regards the production of arms for war, biotechnological engineering, the taking of human life, reproductive technology or the structure of the family itself, we have the tendency to advocate that all which is technologically possible should also be legally licit,” the archbishop said. “This inconsistency calls into question whether we truly place humans at the center of decision-making.”

He called on the U.N. community to “come together to reverse this contradiction.”

“The same principles that lead us to oppose unchecked technology and policies that destroy the environment should also guide us in our prudent use of technologies and creation of policies which directly impact the lives of individuals,” he added.

Archbishop Migliore said the general debate was a time for “those responsible for the national life of every country to come together to get the pulse of the world situation.” More than 100 heads of state and government came to U.N. headquarters for the Sept. 23-Oct. 1 general debate.

The Vatican representative said 2008 “has been dominated by a number of challenges and crises: natural and man-made calamities, staggering economies, financial turmoil, rising food and fuel prices, the impact of climate change, local wars and tensions.”

He said each crisis “presents a mixture of natural factors and elements of human responsibility … too often compounded by tardy response, failures or reluctance of leaders to exercise their responsibility to protect their populations.”

But Archbishop Migliore said the concept of protection has been “too often a pretext for expansion and aggression” and warned against using it “as a pretext for the arbitrary use of military might.”

“The use of violence to resolve disagreements is always a failure of vision and a failure of humanity,” he said. “It is incumbent not only upon states, but also the United Nations, to ensure that the responsibility to protect serves as the underlying measure and motivation of all its work.”