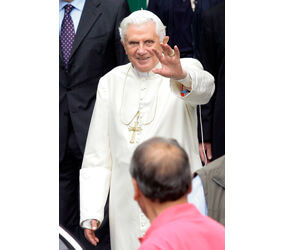 VATICAN CITY – Pope Benedict XVI, who is vacationing in the northern Italian Alps, underwent a procedure under local anesthesia to repair his right wrist, which he had fractured during the night of July 16-17, his personal physician said.

“The Holy Father, accidentally falling in his residence, suffered a dislocated fracture of his right wrist,” Dr. Patrizio Polisca, the pope’s doctor, said in a statement released July 17 by the Vatican press office.

The 82-year-old pope, he said, “underwent a procedure of reduction and osteosynthesis under local-regional anesthesia” at Umberto Parini Hospital in Aosta, less than five miles from the chalet in Les Combes where the pope is staying.

Osteosynthesis is a surgical procedure to stabilize and join the ends of broken bones. Jesuit Father Federico Lombardi, Vatican spokesman, said wires were used to draw the bone pieces together.

Polisca said the pope was in good condition and that a cast was placed around his broken wrist. The pope left the hospital about 4 p.m. local time to return to the chalet; before getting in the car, he waved to reporters and onlookers with his left hand.

Father Lombardi told reporters that the pope simply slipped and fell in the bathroom, ruling out any illness or medical condition as the cause of the accident. When asked if the pope had lost consciousness when he fell, Father Lombardi told Catholic News Service, “Absolutely not.” And, he said, the pope walked to the car and into the hospital on his own two feet.

The spokesman said the procedure to repair the pope’s wrist lasted about half an hour and was carried out by the head of the hospital’s orthopedic section along with another orthopedic surgeon and two anesthesiologists, who also were trained in resuscitation.

Before the procedure began, Father Lombardi told reporters that, despite having already fallen and injured his wrist, “in the morning the Holy Father celebrated Mass and had breakfast, then was accompanied to the hospital in Aosta” for X-rays and a general checkup.

The Italian news agency ANSA reported the pope entered the hospital at 9:45 a.m. Doctors in Aosta told reporters the pope would probably have to wear the cast for a month.

The pope had been scheduled to recite the Angelus July 19 with visitors gathered outside the parish church in the town of Romano Canavese, about 50 miles away from the chalet. Father Lombardi said July 17 it was too early to know if that plan would change.