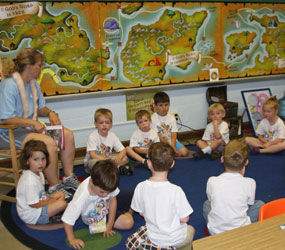 “It was a lot of fun,” said 8-year-old Persis, as she recalled last summer’s event, “so I’m going again this year.”

Once the provenance of Protestant churches, vacation Bible camps, or “schools,” have in recent years been increasingly embraced by Catholic parishes.

“The kids really enjoy them, and it does help in their faith formation,” said Nikki Lux, St. Michael’s director of faith formation, who is already planning the school’s sixth, three-hours- a -day vacation Bible camp scheduled for July 27 through July 1.

Most of the curricula for the camps are developed by Protestant publishers who have a long and successful tradition of offering innovative programs and design concepts. The only difference for Catholic camps, Lux said, is that the Protestant programs are “somewhat adapted” in order to provide “a more Catholic flavor.”

Meaning, she explained, that the available published Protestant-produced programs are examined to make sure they are in line with correct Catholic doctrine while sacramentals, such as holy cards and medals, are provided for the children as part of their experience. And while many Protestant churches tend to use the term vacation Bible “school,” Lux believes “camp” is a more appropriate and inviting description.

Each year’s Bible camp has a different theme. Last year Lux and other staff members chose a water theme, “Adventures on the High Seas.” In which the lower school’s cafeteria was transformed into a boat complete with realistic looking planks made of painted paper and even a captain’s bridge.

“For the children it really was like they were sitting on the deck of a boat,” Lux said.

There were even snacks of blue Jell-O, decorated with peach slices, and made to look like boats. And the morality skits performed by “Chadder Chipmunk” were water oriented.

“I learned about God and about Jesus who told this one guy to walk across the water, and he did,” said Nathan.

“That was St. Peter,” Lux reminded him.

While the children are more focused on having fun and don’t tend to remember a lot of what they may have learned at the camp, Lux said the memories return later.

“It really helps with their faith formation,” Lux said. “It gives the children memories for later in life. It helps them to remember when they hear that particular Bible story in the course of a lesson during the school year and it brings back their memories of what they heard and saw acted out in that story in Bible camp.”

“I just love the little kids,” said St. Michael’s School 14-year-old eighth-grader, Jennifer Myers, who said she liked and learned from the Chadder Chipmunk Scripture-based songs and skits when she was a helper last year. She plans to help again this year.

The next St. Michael’s Vacation Bible Camp will experience a “PandaMania – Where God is Wild About You” theme with – you guessed it – plenty of toy Pandas and Panda-oriented artwork.

A special feature of last year’s camp was a DVD produced by a St. Michael’s school parent and accomplished amateur photographer, Christine Barton, who documented the event in music and pictures.

“It was a wonderful contribution because we were able to give the kids and their parents a really cool DVD of the experience that would help them remember what they learned and how much they enjoyed it,” Lux said.

Barton will be working on another DVD for this summer’s camp. It might well be, Lux said, that the distribution of Barton’s DVDs is one reason why this year’s attendance is expected to be considerably larger than the 105 children who enrolled last year.

An additional fun and faith-directed experience for the children is their participation at St. Michael’s contemporary Mass celebrated on the Sunday following the end of the camp.

“They get to sing some of their songs from the camp, and it helps them re-live and remember the experience,” Lux said.

While St. Michael the Archangel, like most Catholic parish schools, holds only one Vacation Bible Camp event each year, there are many other Bible schools or camps being held throughout the summer in metropolitan Baltimore, both Protestant and Catholic.

“Some parents send their kids to different Bible camps just about every week during the summer vacation,” Lux said, noting that the modest $35 fee St. Michael charges, for example, “beats having to pay a babysitter, not to mention that the kids get great, planned religious oriented activities.”

Next year’s “PandaMania” camp is expected to be bigger and better than before because Lux and her more than 50 volunteers will be designing, painting and setting up the event in the much larger school gymnasium.

“What is PandaMania, anyway?” asked Nathan.

“You’ll find out, and you’ll like it,” Lux responded.