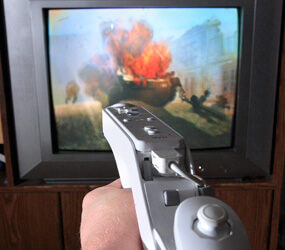 WASHINGTON – The Federal Communications Commission, under new chairman Julius Genachowski, gave notice in September that it intends to look at parental control technologies and how they are used in the multimedia age.

One of those parental control devices is the v-chip, which has been part of the TV landscape throughout the decade. The v-chip allows TV users to block programs if they carry a particular TV Parental Guideline – the rating – or a letter-based content advisory for sex, dialogue, violence or language.

Helen Osman, communications secretary for the U.S. Conference of Catholic Bishops, said that, from her review of the FCC’s report, “they indicate that people are confused about what the different letters mean, and how to use those seems to be a pretty major concern. Maybe the FCC can give some guidance on that.”

Osman has had experience with TV ratings and parental control technology in the form of the v-chip. “I know we used it when our kids were in middle school, but they figured out the code quickly. It’s not a magic button,” she said.

“I think the most effective tool for parents is the space between their two ears – their brains,” Osman added. “You can use the technology, but it’s only a tool. Having said that, I think it can be a useful tool.”

Dominic Perri, executive director of the Coalition for Independent Ratings Services, which encourages and promotes the use of independent ratings systems for movies, TV, video games and the Internet, said, “In a world where media is increasing exponentially and spreading across platforms, the FCC is asking the question, ‘How can we be sure that consumers have the best tools to deal with it?’“

Perri’s organization has dozens of ratings systems on its Web site, https://independentratings.com. While he contends that his site is the most comprehensive collection of ratings systems, one glaring omission is the U.S. bishops’ Office for Film & Broadcasting, which has been classifying movies for their moral suitability since the 1960s and was itself a successor to the Legion of Decency, which started classifying movies in the 1930s.

The majority of ratings systems on the site are Internet software intended to block objectionable Web pages from coming into view. Perri said Internet blockers proliferate because “the barrier to entry, so to speak, to create an Internet filtering or rating system is very low. … The consumer can have access to it in the way they would like to have.”

The same is not true at the point of purchase, according to Perri. “The consumer can’t have access to that system while you’re in the store,” he said.

Despite his organization’s publicizing of alternative ratings systems, Perri is a believer in a common ratings system that crosses the platforms of film, TV, video games and the Web. “In the comment that we filed (with the FCC), that’s one of the things we’ve advocated. For consumers it would be a heck of a lot easier to learn one system,” he said. “There are certainly some technical challenges required. It would definitely require an investment of time and resources. … Is it going to require some focus and leadership? Yes. Is it worth the effort? Yes.”

But Cheryl Leanza, managing director of the Office of Communication for the United Church of Christ, said she expects the FCC’s inquiry to reveal that TV, cable and satellite set-top box technology can “use private ratings systems much more directly. Hypothetically, the FCC could require your set-top box, your cable box or the box from your satellite company to use the U.S. Conference of Catholic Bishops’ – or the ACLU’s (American Civil Liberties Union) – ratings,” Leanza said. “Parents could be empowered to choose the proxy they most trust.”

One problem with current v-chip usage, besides awkward and differing instructions depending on how you receive TV signals, is that the producers provide the ratings to their own programs, which leads to “a lot of inconsistency,” Leanza said.

“Each network makes a judgment about its own show. There’s supposed to be a (review) board,” she added, “but it’s mostly run by the industry. It’s virtually never rejected a network’s rating of its own program. We need a tool to encourage a network to be more consistent.”

Osman said the bishops’ conference has said in the past that “we would really like to see our rating system be available to parents, and we continue to hold that position.”

“We think it continues to be of value,” she added. “We receive a lot of interest in our movie and television reviews. If the technology’s available, it makes it more accessible to parents.”

Osman added, “Part of the ongoing vocation of being a parent is helping your child discern information that they’re receiving and talking it through with them and helping them think and view entertainment critically. And that takes time, and time is one thing that parents never seem to have enough of. The best way to tell a child that a program is not appropriate is to sit with them and watch it with them. And that takes time.”