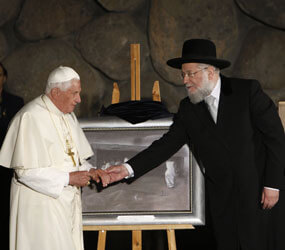 NEW YORK – A group of prominent U.S. rabbis involved in interfaith relations praised Pope Benedict XVI May 12 for his remarks at the Yad Vashem Holocaust memorial in Jerusalem that drew criticism from several Israeli politicians and journalists.

At the memorial May 11 the pope called the Holocaust an atrocity that disgraced mankind and said the church is committed to working tirelessly “to ensure that hatred will never reign in the hearts of men again.”

He met with six Holocaust survivors, who later expressed their appreciation for the pope’s gesture. But critics said they were disappointed the German pope made no mention in his talk of the Nazi perpetrators of the Holocaust.

“I really think it is purposeless to parse every word of the pope, and to read into (his remarks) nuances that were not intended,” said Rabbi Gilbert Rosenthal, executive director of the National Council of Synagogues.

Rabbi Rosenthal made the comments at a press conference in Manhattan with Archbishop Timothy M. Dolan of New York following the spring meeting of the consultation of the U.S. Conference of Catholic Bishops and the National Council of Synagogues.

Rabbi Rosenthal added that “the Holy Father went to Yad Vashem; he prayed at the (Western) Wall; he reiterated the fact that the Shoah must never be forgotten and that the names of the 6 million victims must never be erased from historic memory.”

On May 12, the pope prayed at the wall, a site sacred to Jews as the remains of the Second Temple, and placed a written prayer in a crevice between the massive stones. It asked God to “hear the cry of the afflicted” and “send your peace upon this Holy Land.”

Rabbi Alvin Berkun, president of the Rabbinical Assembly, the official body of Conservative Judaism, stood with Rabbi Rosenthal, and said the pope’s visits to both the memorial and the Western Wall build on the successes of his predecessor, Pope John Paul II, who visited the Holy Land in 2000.

Archbishop Dolan hosted the consultation at the New York chancery, and then welcomed the 12 Catholic and 15 Jewish participants to a prayer service and reception at his residence.

“This is your home,” Archbishop Dolan told the Jewish members of the consultation, who were joined by other New York rabbis.

During the prayer service, Rabbi David Sandmel of the Catholic Theological Union in Chicago, prayed for Archbishop Dolan, newly installed as head of the New York Archdiocese.

“May Archbishop Dolan ever be a source of inspiration and direction, a righteous teacher and a spiritual leader of men and women, young and old,” the rabbi said.

During its meeting, the 20-year-old consultation considered the “proper use of wealth in a time of recession.”

“We live in a culture that stresses ‘good living,’” he said. “But we’ve neglected the idea, which is common to both our traditions, that wealthy people must also do good.”

Speaking for the Catholic tradition, Queens College professor Thomas Bird drew on the parables of Jesus and the social teachings of the popes to identify wealth’s two-sided nature.

“It can be a blessing and a curse,” Bird said. “On the one hand, the increase of wealth enables an improvement in the quality of life. On the other hand, wealth can be a curse if it closes one’s eyes to the needs of others.”

Cardinal William H. Keeler, retired archbishop of Baltimore and the consultation’s co-chairman, presided over the morning session, which included a discussion that showed a significant overlap of Catholic and Jewish moral principles on the use of wealth.

Rabbi Berkum chaired the afternoon session, during which participants discussed a range of Catholic-Jewish issues.

Members of the consultation underscored the importance of communication when a crisis arises between the two communities, such as the uproar last January after the Vatican lifted the excommunications of four traditionalist bishops, one of whom has denied the extent of the Holocaust.