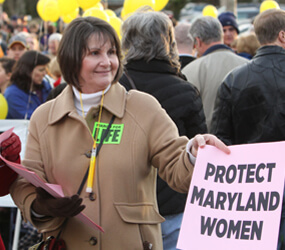 ANNAPOLIS – Scared, unmarried and alone, Tracy Tiernan didn’t think she had many options when she became pregnant. She went to a Severna Park abortion clinic and dealt with her “problem” in the way society told her was OK.

Seventeen years after undergoing the procedure, Tiernan called it the biggest mistake of her life.

Speaking at a March 14 rally by the Annapolis City dock at the end of the 32nd annual Maryland March for Life, Tiernan said she was “held captive to a big lie” that there was nothing wrong with abortion. As she told her story and noted that she found God’s forgiveness, a woman in the throng shouted, “Me too!”

Tiernan delighted in telling the crowd that the abortion clinic she went to so many years ago has finally closed. It shut its doors after a doctor lost his license for not providing proper care of a woman who underwent an abortion there and died after receiving too much anesthesia.

Tightening the regulation of abortion clinics was a major theme of the march, as pro-life speakers urged lawmakers to pass a bill that would regulate abortion clinics as ambulatory surgical centers. The facilities are currently regulated only as doctor’s offices.

Other bills are currently being considered in the Legislature that would require the reporting of abortion statistics and allow women the option of seeing a sonogram of their unborn babies.

Cathy McLeod of Maryland Right to Life noted that Marylanders fund abortion “to the tune of $3 million each year – stopping 4,000 beating hearts on our tax dollars.” Gov. Martin J. O’Malley, a Democrat who supports abortion rights, put more than $12 million in his budget for stem cell research that includes forms of research that result in the destruction of human embryos.

Change can come if pro-life supporters keep up their activism, McLeod said. She noted that through a lawsuit brought by Archbishop Edwin F. O’Brien against the City of Baltimore, a federal judge overturned a city ordinance that would have fined pro-life pregnancy centers if they failed to post government-mandated signs.
In his homily at St. Mary in Annapolis prior to the start of the march, Archbishop O’Brien called ordinances like the one passed by the Baltimore City Council “unconscionably intrusive.” Maryland is the “third-most abortion friendly state in the union,” he said, and has an abortion rate 38 percent higher than the national average.

Referring to same-sex marriage, the archbishop asked “where is the right of God here when faced with a Caesar who would redefine a fundamental definition of marriage and then seek to convince fellow politicians that this has nothing to do with faith, but only with equality?”

“So much for the separation of church and state,” Archbishop O’Brien said.

The archbishop commended the House of Delegates for refusing to pass a bill that would have legalized same-sex marriage. He said they acted “courageously” and “withstood powerfully aggressive political pressure from their leadership.”

The route for this year’s march was different from previous years, as marchers wound their way from St. Mary to the city dock. Carrying bright yellow balloons emblazoned with “Smile. Your Mother chose life,” people of all ages make a public statement in support of life.

Bernice Pearre marched with her 15-year-old daughter, Stephanie. It was the first Maryland March for Life for both of the St. Augustine, Elkridge, parishioners.
Stephanie Pearre, a sophomore at Archbishop Spalding High School in Severn, said she believes the presence of pro-lifers in the capital will have an impact.
“If you can make one person aware and they can make one person aware, that can spread,” she said.

Her mother called it “appalling” that abortion clinics are not better regulated and that there is no parental consent in Maryland for teens seeking an abortion.

“She can’t even take cough drops to school or Tylenol,” Bernice Pearre said of her daughter, “and these women can go out and have abortions without any parental consent or guidance?”

Al Fabula, who marched with his wife, Gwen, and one of their grandchildren, said he is convinced that laws will eventually change as long as pro-lifers are persistent.

“I think people will start realizing that we’re living in a sinful culture by killing all these babies every year,” said Fabula, a parishioner of St. Rose in Brooklyn. “It will stop one day.”

Read George Matysek’s blog at www.catholicreview.org/matysekblog for more on this year’s Maryland March for Life.