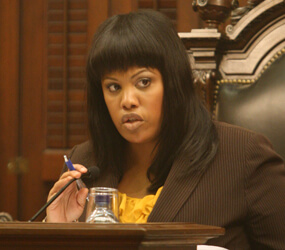 This is an updated version of a story that appeared online Nov. 30, reflecting Mayor Dixon’s Dec. 1 guilty verdict.

Pro-life leaders are vowing to fight a measure passed Nov. 23 by the Baltimore City Council that imposes new requirements on four pregnancy resource centers in the city.

Bill 09-0406, which won approval on a 12-3 vote, requires pro-life pregnancy centers to post signs stating that they do not provide abortion or birth control. Archbishop Edwin F. O’Brien had campaigned against the bill, arguing that it unfairly singles out pro-life centers for harassment.

“To say I’m disappointed is too mild,” said Nancy Paltell, associate director for the respect life department of the Maryland Catholic Conference. “I’m disgusted that lobbying organizations like Planned Parenthood and NARAL hold such power over a governmental body like the City Council.”

Paltell had held out hope that the bill would be vetoed by Mayor Sheila Dixon, but Dixon was convicted of one count of misuse of gift cards Dec. 1.

If removed from office, Dixon would be replaced by City Council President Stephanie Rawlings-Blake, lead sponsor of the controversial measure.

“We should leave them alone,” Paltell said, noting that the centers offer help with clothing, baby supplies, counseling, job referrals and other services.

“The state and the city are sending clients to these charities because they are providing services that no other city or state agency provides,” Paltell said.

Sean Caine, communications director for the Archdiocese of Baltimore, said the archdiocese is considering taking legal action against the city should the bill become law. Paltell noted that there are several other groups taking the same path.

Pro-life supporters have also organized a petition drive to amend the city charter to prohibit the City Council from passing legislation requiring any speech concerning abortion and birth control.

When she introduced the bill in October, Rawlings-Blake said its purpose was to promote “truth in advertising.” She acknowledged that lobbyists for abortion-rights groups asked her to sponsor the measure after they alleged that pro-life pregnancy centers were giving out misleading information. During a bill hearing, none of the 50 people who testified was an actual patient who claimed to have been misled.

Councilman James B. Kraft was the only lawmaker who rose to speak on the bill prior to the Nov. 23 vote. He opposed it, he said, because it does not require women’s centers that provide abortion to indicate what pregnancy-related services they do not offer. His amendment to broaden the bill had been defeated on a 10-5 vote Nov. 16.

“It should not just apply to these four centers,” Kraft said.

Carol A. Clewes, executive director of the Center for Pregnancy Concerns in Baltimore, said her center “doesn’t feel nearly as welcomed in the City of Baltimore as it used to.” She asserted that the bill “impugns our integrity.”

Although pro-life centers already post signs saying they do not provide abortion or birth control, Clewes said her charity will “more than comply” with the bill if it becomes law.

The Baltimore bill, which imposes a $150 daily fine on pregnancy centers that fail to post signs, is believed to be the first of its kind in the nation. A similar effort is being promoted in the Montgomery County Council.