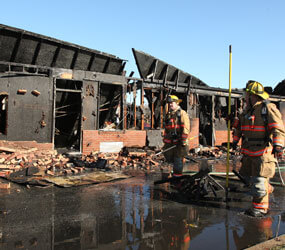 JOPPATOWNE – A winter storm was not the primary concern for Father Joseph C. Simmons on the last Sunday of Advent.

Pastor of Church of the Holy Spirit in Joppa since 1982, Father Simmons has experienced few days there like Dec. 16, when an accidental fire destroyed two-thirds of the parish center and caused an estimated $3.5 million in damages.

The three-alarm fire brought 75 firefighters to the parish in southeastern Harford County. The center is not attached to the Holy Spirit church. No injuries were reported, although a women’s group was forced to make a hasty evacuation.

“It’s a big loss, but we’ll be able to replace it and no one was injured,” Father Simmons said. “I’m very grateful to the Lord. We can still celebrate Christmas in the church.”

The parish is insured through the Archdiocesan Property and Casualty Program.

The State Fire Marshal determined that the fire started in a small kitchenette that was being used for storage. An electrical circuit breaker was inadvertently turned on, energizing a cooking appliance and igniting combustibles. The fire spread to cabinets and the roof.

Father Simmons said he was on “a communion call” when the fire began, halting the Christmas party preparations of the Joppatowne Golden Agers, who operate under the auspices of the Harford County Department of Recreation and Parks.

Alma Marll, the president of the group and a parishioner of St. Stephen, Bradshaw, placed a call to the 911operater at approximately 11:05 a.m., after another member of the group reported a fire.

“After I called 911,” Marll said, “I went to look for my coat and purse, but the smoke was so bad, I couldn’t see the tables and we got everyone out of the building.”

Marll was wearing a borrowed fleece, as she left her purse and coat behind.

“The smoke came in so fast,” said Dottie Bishoff, a Holy Spirit parishioner who is vice president of the Joppatowne Golden Agers. “We had people in walkers and wheelchairs, but we got everyone out. I’ve never seen so many fire engines.”

There was also a substantial presence from the Archdiocese of Baltimore. Within an hour of the first alarm, Archbishop Edwin F. O’Brien was at Holy Spirit, lightening the mood of the Joppatowne Golden Agers with the quip that they “know how to throw a party.”

Turning serious, Archbishop O’Brien said, “We all come together when misfortune like this occurs.”

Also responding were Nolan McCoy, director of facilities for the archdiocese; Bishop Denis J. Madden; and several pastors from the eastern section of the Neumann Vicariate, among them Father Samuel V. Young and Father John B. Ward.

“Having Archbishop O’Brien, his staff and the insurance people, they came as quickly as I got here,” Father Simmons said. “My faith says we’re in good shape.”

Father Simmons said Dec. 21 that no decision had been made regarding the undamaged portion of the parish center.

Mission Helpers of the Sacred Heart Sister Susan Bunn, the director of religious education at the parish, serves in a similar capacity at Prince of Peace in Edgewood.

“She lost her office here, but she’s going to invite our students to Prince of Peace,” Father Simmons said. “We’ve been talking about how we can cooperate. This is a great opportunity to practice what we preach. It’s a great relief to know that we can turn to Prince of Peace.”

Father Simmons had planned to cancel that Mass Dec. 20, when Catholics were excused from their obligation because of unsafe weather conditions, until two hardy Holy Spirit parishioners arrived.

“We canceled 8:30 Mass,” Father Simmons said, “but then Judy Amy and Ed Corcoran walked in for 11:15. It was a quiet, uneventful weekend. Everyone is regretful over the loss, but asking if there is anything they can do to help.”