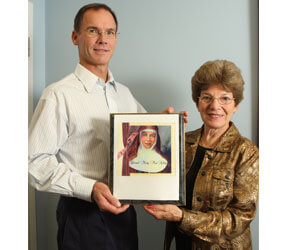 Without the urgency Dolores Orlando feels to protect humanity wherever it is endangered, a man with a family link to Blessed Mary MacKillop and some of their mutual friends would not have an informed Catholic sharing insight into the rituals the group will observe when she becomes Australia’s first saint Oct. 17.

Orlando and Thomas Kiefer met through the Valley Toastmasters. His late mother emigrated to the United States from Australia. An aunt who still lives there married a distant cousin of MacKillop’s, which has made for exciting discussion and research at the group’s twice-monthly meetings in Hunt Valley.

“I help defend life,” Orlando said. “When I joined the Valley group, it was for the purpose of becoming a better public speaker.”

The canonization will add to a memorable church year for Orlando.

She is the sister of Father Gregory Rapisarda and the aunt – and godmother – of Father John Rapisarda. The former’s June 12 ordination made them the first father-son priests in the Archdiocese of Baltimore in two centuries.

“Dolores has always been an encourager, a person I go to for advice,” Father Gregory Rapisarda said. “She’s always been a devout Catholic, a daily communicant. She’s an enthusiastic defender of life. She approaches that cause with an enthusiasm that is inspiring.”

A parishioner of Immaculate Conception in Towson, Orlando is the only Catholic in the group that was to depart for Rome Oct. 13. In addition to Kiefer and three of his relatives, the party includes fellow Valley Toastmasters Carol Hawtof and Linda Losey.

“It’s going to be an education for me,” Hawtof said. “I’m Jewish. I haven’t traveled in 19 years. My husband died, and my friends said, ‘you’re coming with us.’ This lady (Orlando) has sent the most wonderful knowledge my way.”

Kiefer’s clan, meanwhile, is as remarkable as Orlando’s.

A civil engineer for Baltimore County, Kiefer grew up in Anne Arundel County but spent second grade in Australia, on a year-long adventure with his mother, Sheila, to her native land.

She had left Australia in the early 1940s to study at Boston College. Older graduates of Severn School remember her as a legendary teacher and tennis coach.

“I had never heard of Blessed Mary MacKillop,” Kiefer said, “but when I learned that she was to be canonized, and that there was a family connection, I immediately started doing research. Knowing my mother and my Aunt Mary, the one who married a McKillop (the a has been dropped from the name) … they may not be from the same bloodlines, but those women have the same tenacity.”

According to Catholic News Service, Blessed MacKillop was the oldest of eight children, born in 1842 to Scottish parents in Victoria, the state that includes the metropolis of Melbourne. She co-founded the Sisters of St. Joseph of the Sacred Heart and was briefly excommunicated in late 1871, at age 29.

According to CNS, her religious order confirmed an Australia Broadcasting Report that her excommunication was retaliation for the order’s reporting of a priest’s alleged abuse of children. The excommunication was lifted after five months, and in 1873, according to CNS, Blessed MacKillop visited Pope Pius IX to “counter a move by clergy against the (her) congregation.”

Local church officials disapproved of Blessed MacKillop and her order, who lived in isolation as they followed poor farmworkers and miners into the Australian outback. Her canonization cause began in the 1920s, and received a boost at World Youth Day in 2008, when Pope Benedict XVI prayed at her shrine in Sydney.

Others heading to her canonization include Kiefer’s daughter, Lindsey, a Tulane University architecture student who happens to be spending the fall semester studying in Rome; his brother, Bruce; and his sister-in-law, Joan.

While Kiefer compares lines on his family tree, Orlando notes other connections. She likens Blessed Mary MacKillop to St. Elizabeth Ann Seton, who professed her religious vows in Baltimore and became the first saint born in the U.S.

“Both women fostered a deep desire to teach the love of Jesus to the poor,” Orlando said. “Both women were responsible for the beginnings of Catholic education to the poor in their own continents.”