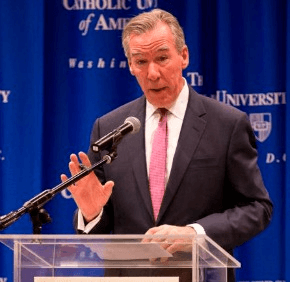 NAPA, Calif. – A majority of a university’s faculty “must be Catholic” for a university to be Catholic, said the president of The Catholic University of America in a speech in Napa.
“I want to make one point. Building a Catholic university is not a complicated thing,” John Garvey said July 7 during the Napa Institute’s annual conference, held July 6-10. “The plan was laid out in 1990 by St. John Paul in the apostolic constitution ‘Ex Corde Ecclesiae,’ a document that runs about 50 pages.
“But the kernel of the argument is in four short lines near the end. St. John Paul says for a university to be Catholic a majority of its faculty must be Catholic,” Garvey said.
“He did not say he and the other bishops should superintend the Catholic character of a Catholic university,” Garvey said.
That was the pontiff’s “way of saying bishops are not academics,” he continued. “We don’t know how to build university faculties. The only thing we insist on is that you choose Catholics to do it. This is, as I say, a fairly simple plan. If the university follows it, the university will be Catholic. If it doesn’t, it won’t.”
In the introduction to the apostolic constitution on the Catholic university, St. John Paul II states: “A Catholic university’s privileged task is ‘to unite existentially by intellectual effort two orders of reality that too frequently tend to be placed in opposition as though they were antithetical: the search for truth, and the certainty of already knowing the fount of truth.’”
Garvey said that requiring commitment by faculty and administrators to a Catholic intellectual tradition and culture is not in opposition to academic freedom.
“The defense of originality does not demand the rejection of orthodoxy,” Garvey said, although there is “resistance in the academy” or university establishment to that idea.
The Catholic University of America is the only pontifical university in the U.S. Three popes have visited the school – St. John Paul in 1979, Pope Benedict XVI in 2008, and Pope Francis last September, when he canonized St. Junipero Serra during an outdoor Mass at the Basilica of the National Shrine of the Immaculate Conception right next to Catholic University. The Mass was on the east portico of the national shrine with the congregation gathered on the university grounds.
“Building a Catholic university, building a Catholic faculty is not tribalism,” Garvey said. “It is a recognition that in order to create a distinctive Catholic intellectual culture we need to build an intellectual community that is committed to our Catholic worldview. A shared commitment to Catholic ideas about creation, and providence of human beings, and human beings made in the image of God will spur creativity and the development of a culture that expresses those ideas.”
“We can’t predict exactly what sort of culture such a community would produce,” Garvey said. “History suggests it will be something distinctive and wonderful.”
The Napa Institute was created in response to “a growing trend toward secularization in American culture, with Catholics facing dwindling relevance, threatening their ability to be heard.”
Its mission statement says: “By leading participants to a deeper understanding of the truth behind the faith, the Napa Institute emboldens Catholics to live and defend their faith with a peaceful confidence that is borne out of solid formation, fellowship and spiritual enrichment.”
Besides Garvey, this year’s conference included as speakers New York Cardinal Timothy M. Dolan, Princeton University scholar Robert George, former Republican presidential candidate Carly Fiorina and Archbishop Bernardito Auza, the Vatican’s permanent observer to the United Nations.
The Napa Institute was founded by Tim and Steph Busch, who also are major benefactors of Catholic University. Earlier this year, Catholic University announced it would rename its business school the Tim and Steph Busch School of Business and Economics.
The Busch Family Foundation’s lead gift of $15 million was the largest financial commitment the university had received, according to the university, and was part of a $47 million total of six commitments to the school.
In introducing Garvey at the July 7 event, Tim Busch credited him with doing “an amazing job to make The Catholic University of America Catholic, because sometimes it wasn’t.”