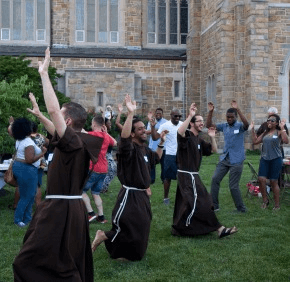 By Kyle Taylor
Special to the Review
Wow, what a week.
Those words rang through my head numerous times this past weekend. A tumultuous week that saw the fatal shootings of two black men by the hands of police officers in Falcon Heights, Minn., and Baton Rouge, La., and the slaying of five police officers in Dallas during a Black Lives Matter march had finally come to a merciful end.
The irony that many of us who began the week celebrating the red, white and blue of the American flag ended it observing that same flag at half-mast had not been lost on me.
As a black man living in Baltimore, where the death of Freddie Gray cast the city into the national spotlight, the week’s events caused me to experience a gamut of emotions – anger, frustration, sadness, exasperation, fear and fatigue. By the time the weekend arrived, I was hesitant to go to sleep, unsure of what horrific news I would wake up to once again.

If there was ever a time where I could use even a hint of serenity, this was it. Luckily for me, I found the peace I needed from a familiar place.
My parish, St. Ambrose Catholic Church, hosted a meet and greet for the Urban Catholic Young Adult Ministry (UCYAM). Focusing on ages 21-45, the group aims to administer to the spiritual needs of young adult Catholics in the city.
The ministry’s committee is comprised of young adult youth advisors from various churches in the city. It was birthed when they realized that while focusing on the spiritual growth of the youth at their respective parishes, they were not focusing on their own growth.
“We never really got the chance to do anything where it was just us as young adults,” said Enoch Attenoukon, parish council president at St. Ambrose and a UCYAM member. “We want to rejuvenate and retain young adults in the Catholic Church through evangelization, spirituality, fellowship and service. That’s basically our motto.”
About 35 people attended the event on the grass of St. Ambrose. It featured icebreakers and other interactive activities that helped us get to know one another. For me, however, it was the session inside the church that really struck a chord.
Capuchin Franciscan Brother Tommy Piolata spearheaded a session on “the power of prayer,” and how it is unseen and mysterious, yet so real. He was accompanied by three other Capuchin Franciscan friars – Brothers Andrew McCarty, Francisco Lopez and Diogo Escudero – who gave testimonials on how prayer has worked in their own lives. Brother Tommy stressed that we must be indifferent to God’s decisions when we pray, instead of praying for God to tell us what we want to hear; for his plan is our salvation.
Brother Tommy reminded me of something which I already knew – that prayer does indeed work. I can attest to this from many personal experiences. Admittedly, I don’t pray as much as I need to, and can present a plethora of sorry excuses as to why. However, as Brother Tommy spoke, I realized that the troubles that were weighing heavy on my mind and heart should be put into the hands of God, a being more than capable of resolving them. Brother Tommy’s words could not have come at a better time – he didn’t reinvent the wheel, he just reminded me that I needed to use it.
“When these tragedies happen, we question ‘why is this happening, what’s going on in the world,’ ” Attenoukon said, when I suggested to him that this event came at the right time. “Sometimes we have to take a step back and realize that we don’t have the answers to deal with these things, and we need God’s help.”
Sometimes taking a step back into humility is needed to step forward into confidence, and I’m hopeful that I’m not the only one who left the event with a greater sense of spiritual sustenance.
The Urban Catholic Young Adult Ministry will be hosting a kickball event on Saturday August 6, and a game night on Friday September 16. For more information, telephone 410-367-9918.