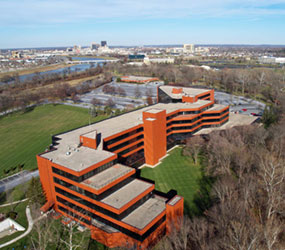 DAYTON, Ohio – With the purchase of 115 acres, the University of Dayton plans to move its expanding research institute into a building that formerly housed the world headquarters of a global technology company.

The Catholic university paid $18 million for the NCR Corp. property, and leaders of the school said its new building will become the signature facility for the University of Dayton Research Institute, which conducts nearly $100 million annually in sponsored research.

The institute recently received its largest contract in its history – $49.5 million to develop advanced jet fuels and combustion technologies for the U.S. Air Force.

Daniel Curran, University of Dayton president, called the acquisition “a bold move for a private, Catholic university” and said in a statement that it gives the university much-needed space to expand.

Approximately 260 researchers, support personnel and students are expected to move into the building during the next three years, and about 160 researchers will continue to work at Wright-Patterson Air Force Base outside of Dayton, and in leased space around the Ohio city, university officials said.

NCR is moving its operations to Georgia, according to a report in the Dayton Business Journal.

University officials said the new property also will provide its graduate school with more classroom space and parking and will be the new home for its proposed alumni center.

The primary focus of the facility will be on the school’s research institute, allowing it to build momentum in research growth, university officials said.

The university is ranked as a national research school and its sponsored research has nearly tripled in the past decade – rising from $37.1 million to $96.5 million. It remains second in the nation in materials research, according to the National Science Foundation.