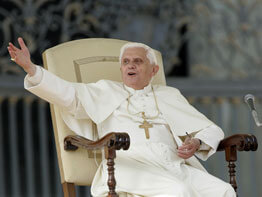 VATICAN CITY – Understanding the roots of past conflicts can help Catholics and Mennonites heal their relationship and move toward a common witness of faith in Jesus, Pope Benedict XVI said.

“Since it is Christ himself who calls us to seek Christian unity, it is entirely right and fitting that Mennonites and Catholics have entered into dialogue in order to understand the reasons for the conflict that arose between us in the 16th century,” the pope said during an Oct. 19 meeting with leaders of the Mennonite World Conference.

“To understand is to take the first step toward healing,” Pope Benedict said.

The Mennonites are a branch of the Reformation movement known as Anabaptists because they rejected infant baptism and insisted adults be baptized as a public confession of faith.

In the 16th century, thousands of Anabaptists were declared heretics and put to death by some European Catholic governments, such as the Habsburgs in the Netherlands and the Tirol region and the dukes of Bavaria, as well as by Protestant governments in Germany and Switzerland.

The official Catholic-Mennonite dialogue commission published its document, “Called Together to Be Peacemakers,” in 2003, examining the historical roots of the conflict between the two communities, examining their contemporary understandings of the church, baptism and Eucharist, and exploring their relative teachings on peace and nonviolence.

Pope Benedict told his Mennonite guests that the document demonstrated a shared belief in Christ as the true source of peace and a common understanding that reconciliation and peacemaking are at “the heart of the Gospel.”

“Our continuing search for the unity of the Lord’s disciples is of the utmost importance,” the pope said. “Our witness will remain impaired as long as the world sees our divisions.”

The Mennonite delegation was led by Nancy Heisey, conference president and a professor at Eastern Mennonite University in Harrisonburg, Va.