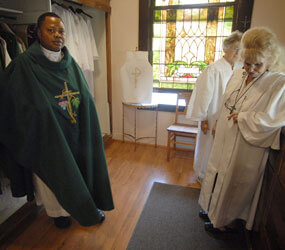 DOUGLAS, Ariz. – In the weeks leading up to the scheduled enactment of Arizona’s much-debated immigration law July 29, everyday activities and conversations conveyed a sense of a state under siege, particularly in Douglas, a town of 20,000 people on the Mexican border.

The reality is that the number of people caught attempting to enter the United States in Arizona illegally is down, as is crime along the border and throughout the state, according to reports by the Border Patrol and county sheriffs.

But the atmosphere in Arizona is perceptibly one of fear and anxiety about illegal immigration. Polls show a majority of Arizonans support the law passed by the Legislature in April. But according to a recent survey done for the Arizona Republic newspaper, they also support a comprehensive approach to immigration reform, which includes a pathway to legalization for undocumented immigrants who have no criminal record.

On July 28, U.S. District Court Judge Susan Bolton blocked the most controversial parts of the law, known as S.B.1070, from taking effect. But the injunction is preliminary, pending further judicial review. Several lawsuits challenge it, but Bolton addressed only the suit brought by the U.S. Department of Justice, which says the law is unconstitutional.

Because Bolton’s ruling only blocked enforcement of some of the law pending further review – which could take years – it’s unlikely to settle the unease in Arizona about immigration any time soon.

For most people, the feeling of being besieged by the issue at least in southern Arizona comes less from any personal sense of being overrun by undocumented immigrants than from the pervasive focus on S.B.1070, bringing attention from around the world and fostering unrelenting debate within the state.

During one week in mid-July, each day’s newspapers, every radio and television newscast, political commercials and billboards, and conversations among friends and strangers alike inevitably turned to S.B.1070.

Father Gilbert Malu, pastor of St. Luke’s Catholic Church and two other parishes in Douglas and nearby Pirtleville, faces a microcosm of the conflicting concerns over immigration. His parishioners are Border Patrol agents; Mexican-Americans and Anglos with roots on the north side of the border going back generations; undocumented immigrants, some of whom have lived in Douglas for 20 years or more; and many of the ranchers whose miles-long stretches of isolated grazing land provide a preferred path for smugglers who sneak people and sometimes illegal drugs into the United States.

They include Sue Krentz, a Douglas native from a longtime area ranching family whose husband, Robert, was shot to death on their ranch in March. No arrest has been made and the murder remains unsolved. Nevertheless, his death became a rallying point for supporters of S.B.1070, who pushed it through the Legislature a few weeks after his shooting, following years of failed efforts on similar legislation.

While he stays out of political debates, Father Malu said, his pastoral position on Arizona’s immigration situation is heard in his calls from the pulpit to follow the example and words of Jesus: “‘Go and do likewise, become a neighbor to another human being,’“ he said. The message doesn’t always go over well.

“One parishioner calls me a terrorist and says I don’t love this country,” said Father Malu, an immigrant from Congo who has lived in the United States for two decades and been in Douglas for eight years.

Meanwhile, his daily work includes handling the pastoral needs of Border Patrol agents as well as of some of the undocumented immigrants the federal agents are charged with finding and removing.

On the south side of Douglas, shoppers from Agua Prieta, Mexico, walk across the “the line,” as locals call it, to shop at Wal-Mart, Safeway and J.C. Penney stores located a block north of the border fence. Before walking back with their packages, they might stop for lunch at McDonald’s or have a cappuccino and use the free wifi at Caffenio, a Mexican coffee chain with its first U.S. outlet across the driveway from Burger King.

With Agua Prieta’s population more than three times the size of Douglas, merchants worry that Mexicans may feel so intimidated by Arizona’s attempt to crack down on illegal immigration that they will stop crossing the border to shop in Arizona, even though they do it legally. Residents of border communities can fairly easily obtain crossing cards that allow them to go back and forth within 25 miles of the border for short visits.

But anyone tempted to go farther into the United States on southern Arizona highways and back roads will encounter Border Patrol checkpoints. There, all cars are stopped, though those carrying only people with fair skin are likely to be waved through, often without a word. Other people are asked their country of citizenship, and some are asked to provide proof they’re in the United States legally.

Even 60 miles from the border at Sacred Heart Parish in Tucson, Carmelite Father James Geaney, pastor for about a year, said he has noticed that some families seem to have left Tucson without a word to him. A majority of parishioners are Hispanic, he said, and he suspects that the 10 percent decrease in attendance at the Sunday Spanish Mass is related to fears about S.B.1070.

One business owner whose clientele is primarily immigrants told him “business is down by 50 percent,” said Father Geaney.

“It’s hard to say if people are scared to come out or if they went back to Mexico,” he said. “There is a sad feeling of being rejected. They walk down the street feeling as if people are thinking ‘you must be illegal, go home.’“