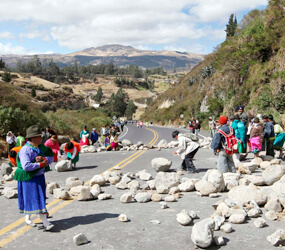 UNITED NATIONS – In a time of economic crisis, the challenges of indigenous people should not be forgotten, the Vatican’s nuncio to the United Nations told a U.N. committee Oct. 19.

Archbishop Celestino Migliore’s discussed the rights of indigenous people and reminded world leaders that “pertinent initiatives should be guided by principles of respect for the identity and culture of indigenous populations.”

He made the remarks to the U.N. General Assembly’s Third Committee, which deals with social, cultural and humanitarian issues.

The archbishop also spoke about the problem of food insecurity and water shortages, the vulnerability of women and children to HIV and AIDS, and the promotion of agricultural development.

Archbishop Migliore said human rights violations continue and that the Declaration on the Rights of Indigenous Peoples, passed by the General Assembly in September 2007, is not being fully implemented.

The archbishop said the issue of food insecurity must to be addressed within a long-term point of view to eliminate “the structural causes that give rise to it” and promote agricultural development in poorer countries.

It is necessary to create a public conscience which recognizes that food and access to water are the universal rights of all people, without distinction or discrimination, he said. “The right to food, like the right to water, has an important place within the pursuit of other rights, beginning with the fundamental right to life.”

“Openness to life has long been at the center of the indigenous people’s spirituality and if personal and social sensitivity toward the acceptance of new life is lost, then other forms of acceptance that are valuable for society also wither away,” he said.

Archbishop Migliore also said the world must remember the vulnerability of indigenous peoples, especially women and children, to HIV and AIDS and that “special attention and appropriate health education is essential to preventing its transmission.”

“The fundamental dignity of every person and promotion of human rights remain the most effective strategy for their comprehensive development,” he said.