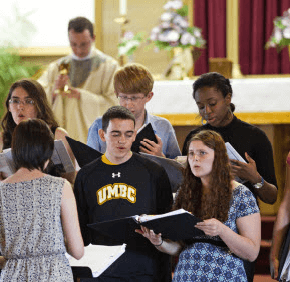 By Maria Wiering
mwiering@CatholicReview.org
Twitter: @ReviewWiering
ARBUTUS – Father John Rapisarda calls it “building a plane in mid-flight.”
University of Maryland, Baltimore County’s Catholic chaplain, Father Rapisarda is working to reenergize a once underdeveloped outreach into something capable of establishing a Catholic subculture on the honors university campus.
His strongest resources are his pastoral assistant, Deirdre Horne; a group of enthusiastic students; and a Methodist church that serves as the ministry’s home base.
Ordained in 2008, Father Rapisarda is an associate pastor at Our Lady of Perpetual Help in Ellicott City and part-time UMBC chaplain, positions he assumed in July 2011. The campus ministry program had a dwindling membership when he took the helm, and Father Rapisarda and Horne, 24, are working to strengthen its foundation and expand its outreach.
Their work to fortify the program – called “Catholic Retrievers” in homage to the school’s mascot and Maryland’s state dog, the Chesapeake Bay Retriever – coincides with UMBC’s transition from a commuter school to a residential campus. About 4,000 undergraduate students – 40 percent of the undergraduate population – now live on campus, motivating all student programs to reevaluate how they meet student needs, Father Rapisarda said.
Horne sees their work as a challenge and an opportunity.
“It’s given us room to go in the direction that we want to,” she said. “It’s new ground, and we have no precedent to keep up with or try to prove ourselves.”
For years, UMBC’s Catholic campus ministry used lecture halls for Mass, but scheduling conflicts with other events often required Masses to relocate, creating confusion for students. Mass is now celebrated at Arbutus United Methodist Church, across the street from campus.
Catholic Retrievers’ offices may move there, too. Currently, the program is based in UMBC’s Interfaith Center, a mobile home that houses campus faith-based organizations.
Catholic Retrievers offers Mass on Sundays and Wednesdays; weekly Bible studies; adoration; daily rosary; and service work at St. Martin’s Home for the Aged, a nursing home run by the Little Sisters of the Poor in Catonsville.
Sunday Mass is followed by dinner, adoration and confession. Up to 60 students attend Catholic Retrievers’ Sunday Mass; about 25 stay for dinner.
Father Rapisarda hopes those numbers grow.
He estimates there are 2,000 Catholic students at UMBC, and is trying new ways to reach them.
On UMBC’s secular campus, Catholic students seem hungry for a deeper understanding of their faith, Father Rapisarda said.
“The students have wanted somebody to say this (the practice of one’s faith) is worthy of your sacrifice,” he said. “It brings to light more clearly the need to teach the fullness of the faith well, and lovingly, and without any compromise.”
Before he entered seminary, Father Rapisarda attended Franciscan University of Steubenville in Steubenville, Ohio, where he experienced an authentic Catholic culture, he said. Knowing what that looks like drives his ministry now, he said.
Also motivating him are statistics outlining the trends Catholic Retrievers is confronting. According to a Pew Research Center study released in 2009, 79 percent of people who were raised Catholic and are now unaffiliated with a church stopped practicing their Catholic faith before age 24. Sixty-six percent of people raised Catholic but who became Protestant also converted by the end of their college-age years.
Schnaude Dorizan, 21, thinks she may have been among the Catholics who drift away during college, if not for UMBC’s campus ministry. The Catholic Retrievers’ president and a college senior from Brooklyn, N.Y., Dorizan said having Mass available on – and now near – campus has kept her faith vibrant. The closest Catholic church, Our Lady of Victory in Arbutus, is two miles from campus and not easily accessible without a car, Dorizan said.
She has learned “there’s no excuse for me not to practice my faith,” she said. “Having it in school has made me realize I can have (faith) anywhere.”
Copyright (c) May 19, 2013 CatholicReview.org
PrevNext