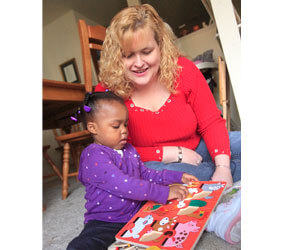 WILMINGTON, Del. – When Melissa Stam received a text message from a friend Jan. 12 telling her about the earthquake that hit Haiti, all she could do was cry.

“I was supposed to be there,” said Stam, who had returned to the United States Jan. 11 after receiving her newly adopted daughter, Jaden Gabrielle, from a Haitian orphanage. “It was insane, just to think of what could have happened. It was all I could do, cry. I held her in my lap and I’m crying and sobbing. We would have been at the airport when it happened. It’s a miracle. She’s my miracle.”

After a 37-month-long adoption process, Stam, 41, a member of St. Helena’s Parish in Wilmington, was scheduled to pick up 3-year-old Jaden at Haiti’s international airport the afternoon of Jan 12.

However, when the adoption agency contacted Stam Jan. 8 to let her know she could take her new daughter home a day sooner, she paid $2,300 to change her flights, getting her and Jaden home just before the disaster. The date was moved up because of the number of appointments scheduled for other adoptions that week at the orphanage right outside Port-au-Prince.

“I didn’t even know if I had the airfare at first to change the flight,” Stam told The Dialog, newspaper of the Wilmington Diocese. “It all happened so fast. But I looked online, I found the flights were available and I booked them. I was shaking. After 37 months this was finally happening and even a day earlier than I thought.”

When she finally was given Jaden at the airport, and with a stop at immigration, “it was a whirlwind,” she said.

Stam, who is divorced, said she knew she was “born to be a mother. I knew I could love any child like they were my own.”

So in early 2006 she began the home study and application process to adopt a child through Casi Foundation for Children, an Idaho adoption agency.

“My social worker said, ‘Open your e-mail and I want to be on the phone with you when you do it.’ And then I saw (Jaden’s) face and knew instantly it was my daughter. It was her. It was who I pictured and the love was amazing and instantaneous.”

Stam named her daughter, who was 8 months old at the time, Jaden Gabrielle: Jaden means “God has heard” in Hebrew, and Gabrielle means “woman of strength.”

Stam met her daughter for the first time when she visited Haiti for a week in 2008 with other adoptive parents; she also met Jaden’s birth mother.

Though she felt blessed to have that week to bond with Jaden, her departure was bittersweet.

“When I had to leave she wouldn’t let go of my neck. That was the hardest thing I ever had to do. But I just kept saying to her, ‘Baby, next time I see you it will be to take you home with me.’”

Although Stam looked forward to the updates with pictures she received from the orphanage about Jaden, it broke her heart to see the sadness in Jaden’s face, a look Stam said stemmed from the constant lethargy the children of the orphanage had from drinking tainted water.

“Jaden had a parasite and for two years she didn’t gain a pound or grow an inch,” she said.

After two weeks in the U.S., Jaden had gained six pounds and gone from clothes sized for an 18-month-old to those for a 24-month-old.

Stam plans to teach Jaden as much as she can about her Haitian culture.

When she returns to work at an insurance company, Jaden will stay with Stam’s parents.

“She’s my joy. I tell her, ‘Little girl, you never need to doubt that you and I are a miracle and it’s a miracle that we ended up together,’” Stam said.