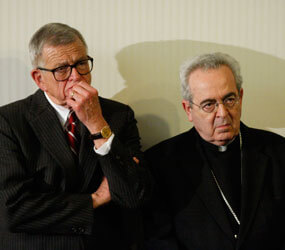 WASHINGTON – More than 140 Christian leaders issued a joint declaration Nov. 20 pledging renewed zeal in defending the unborn, defining marriage as a union between a man and a woman and protecting religious freedom.

The 4,700-word statement, called the “Manhattan Declaration: A Call of Christian Conscience,” was signed by 14 Catholic bishops, evangelical and Orthodox leaders and other Catholics. The document pledges the group’s “obligation to speak and act in defense of these truths” and stressed that “no power on earth, be it cultural or political, will intimidate us into silence or acquiescence.”

About 16 religious leaders who signed the document attended the Nov. 20 press conference in Washington to unveil it. Washington Archbishop Donald W. Wuerl, who welcomed the group to Washington, said the document echoed “what needs to be said” today and did so “with a collective voice.”

Several speakers pointed out that the issues highlighted in the “Manhattan Declaration” are not new, but there is a new urgency to defend them.

“Justice demands that we not remain silent,” said Cardinal Justin Rigali of Philadelphia.

Some speakers mentioned the possibility of civil disobedience, if necessary, to defend their beliefs.

“There are limits to what can be asked or imposed on our consciences,” said Robert George, a member of the document’s drafting committee and a jurisprudence professor at Princeton University.

George, who is Catholic, said any protests or acts of resistance “would be carried out respectfully” and with nonviolence.

The document states that the signers “will not comply with any edict that purports to compel our institutions to participate in abortions, embryo-destructive research, assisted suicide and euthanasia, or any other anti-life act; nor will we bend to any rule purporting to force us to bless immoral sexual partnerships, treat them as marriages or the equivalent, or refrain from proclaiming the truth, as we know it, about morality and immorality and marriage and the family.”

When asked by a reporter about the issue of civil disobedience, Archbishop Wuerl said: “We hope it does not come to that.”

Recent news reports have claimed that the Archdiocese of Washington and its social service arm, Catholic Charities, are threatening to stop providing social services if the District of Columbia City Council’s proposed same-sex marriage bill pass.

The archdiocese said it will continue its outreach services, but its work would be significantly limited as the bill offers little protection for religious beliefs and would require Catholic Charities to recognize and promote same-sex marriage in employment policies, and adoption and foster-care policies.

Catholic Charities’ homeless shelter, counseling and adoption programs are funded with $20 million in government contracts and about $10 million in funds from the archdiocese.

The Catholic Church also has been vocal in supporting health care reform that does not include coverage of abortion.

When asked by a reporter if it would be a sin for a Catholic legislator to vote for health care coverage that included abortion, Cardinal Rigali emphasized the desperate need for health care reform and simply stated that “abortion was out of the question.”

The current health care debate in Congress, and local discussion about same-sex marriage laws, were not as pronounced last summer when the group of religious leaders first met in New York to draft this statement. Some of the signers noted that although the document could have been written years ago or even years from now, it has particular significance right now.

“We see an increase in the threat to human life,” said George, noting that the current administration and Congress have supported abortion measures and also embryonic stem-cell research, an action which he said “ups the ante very much so.”

On life issues, the declaration urges “all elected officials in our country, elected and appointed, to protect and serve every member of our society, including the most marginalized, voiceless and vulnerable among us.”

In its defense of marriage as a union between a man and a woman, it notes a progressive erosion of the culture of marriage due to infidelity, high divorce rates and out-of-wedlock births.

The document states that the “impulse to redefine marriage in order to recognize same-sex and multiple-partner relationships is a symptom, rather than the cause, of the erosion of the marriage culture” and it further adds that “no one has a civil right to have a nonmarital relationship treated as a marriage.”

On the issue of religious liberty, the document highlights weakened or eliminated conscience clauses that force “pro-life institutions (including religiously affiliated hospitals and clinics), and pro-life physicians, surgeons, nurses, and other health care professionals, to refer for abortions and, in certain cases, even to perform or participate in abortions.”

It also notes the use of “anti-discrimination statutes to force religious institutions, businesses, and service providers of various sorts to comply with activities they judge to be deeply immoral or go out of business.”

The documents signers urged the public to sign the online version of the document at http://manhattandeclaration.org. As of midday Nov. 23, the document had more than 35,000 signers, according to the Web site.

One of the initial signers, Archbishop John C. Nienstedt of St. Paul and Minneapolis, described the document as an attempt to “light a fire.”

“Hopefully that fire will catch on and touch the troops in the rank and file,” he told The Catholic Spirit, the archdiocesan newspaper, adding that parishes should take up the issues raised in the document.

“The church, by her very nature, is not a political animal,” the archbishop added, “but the church has to continue to teach and to educate people in these very essential issues.”