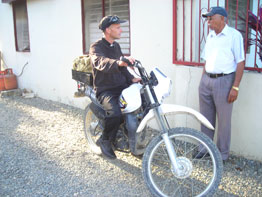 As the two-wheeled motor vehicle raced up the dirt road, the villagers began to gather and greet the helmeted rider as he brought the bike to a halt. When the headgear came off, the face of Father Christopher Murphy was revealed.

“When I was in Virginia, we had parishioners who came from far away, but the difference was they were able to travel to us,” Father Murphy said. “Most of these people have no means of transportation, so I have to go to them.”

The 38-year-old priest from the Diocese of Arlington, Va., has been on loan to the Diocese of San Juan de Maguana in the Dominican Republic for the past three years and serves as pastor of San Jose in Pedro Santana, a town near the Haitian border.

His parish serves more than 5,000 Catholics, many of whom attend Mass in about 30 small chapels in villages spanning a 200-kilometer radius, requiring the American priest to travel at least three days each week to these outposts by motorcycle, mule and foot.

Living in the rectory of St. Francis of Assisi in nearby Banica with the pastor of that church – Father Daniel Gee, 40, who has been on loan from the Diocese of Arlington for nearly five years – the two American priests have found a way to reach the poor of the region, meet their pastoral needs and help improve their lives, all while discovering the customs of Catholics in this part of the world.

“It’s been a tremendous experience, one that’s made me more compassionate and understanding,” said Father Gee, who built a school at his parish where 172 boys and girls are now educated less than a year after arriving.

The Diocese of Arlington has been loaning priests to the region since the early 1990s and Father Gee said the mission is more than pastoral. The two men have partnered with Food For The Poor to build houses, tilapia farms, livestock facilities, water wells and are experimenting with a windmill station to provide electricity to some rural villages, like La Palma.

The two men are very different in temperament. Father Murphy is gentle and calm, while Father Gee is athletic, adventurous and exposes a forceful ‘get-the-job-done’ nature.

However, both men express deep respect for the other’s devotion to his flock and abilities in his vocation.

Father Murphy arrived in the small village to examine the turbine that will be installed on the windmill when it’s completed.

Skeptical about how much electricity it will provide residents, he was satisfied it will ultimately improve living conditions.

The priest’s next stop was a 30 minute motorcycle ride to a neighboring settlement, where he was scheduled to baptize several babies.

“I always tend to get big congregations when we have baptisms,” he said. “I get as many as 40 people for Mass during those visits.”

In the distance is the Mountain of St. Francis – where locals believe St. Francis appeared to missionaries many years ago.

The local bishop celebrates Mass annually in the cave where this apparition is believed to have occurred, Father Murphy said.

“The Catholics have strong customs here,” he said. “For example, after someone dies, the villagers spend nine days in prayer. It can be very taxing on them, and we try to accommodate them in the best way we can.

“It’s been a wonderful experience.”